January 14, 2018 Vita Historia
Lee-Jackson Day is not a holiday that is generally recognized throughout the United States, and even in Virginia, where the holiday originated, most people are unaware of it. Yet it persists, tied to the Friday before the third Monday in January, which happens to be Martin Luther King Jr. Day. For nearly 20 years at the end of the twentieth century, the two holidays were bundled together in Virginia on the same day, making it an even more peculiar observance. Since the separation of Lee-Jackson day to the Friday preceding Martin Luther King Jr. Day, some of the minority of people who regularly note its passing are the state workers who get Friday off, and therefore a very long weekend on account of the national holiday the following Monday.

Giving some state workers an extra day off is a poor excuse for continuing a holiday that most people have little enthusiasm for observing. There are small groups of Southern history enthusiasts who gather in Lexington, Virginia, every year on the long weekend (long, but not very long, because it includes Friday, but generally not Monday), where both Robert E. Lee and Thomas “Stonewall” Jackson are buried. Washington and Lee University, a private institution in Lexington, and the place where General Lee was president from shortly after the Civil War until his death in 1870, only recently started distancing itself from the Confederate memorializing controversy by refusing to lend its facilities to these Southern history groups and by canceling classes on Martin Luther King Jr. Day.

The Southern history enshrined by observances like Lee-Jackson Day and by monuments to the Confederacy is a peculiarly blinkered history, however, and for enthusiasts of that narrow vision to act perplexed when some other folks object is either daftly naive or disingenuous, more likely the latter. In the Jim Crow days of the late nineteenth and early twentieth century when many of the Confederate memorializing was first officially sanctioned as a means of reminding everyone who was still really in charge in the South, fans of the Confederacy could be quite open about their views and not be concerned over anyone’s objections. It was easier then to point out such people for what they were, even if it was harder to do anything about it. 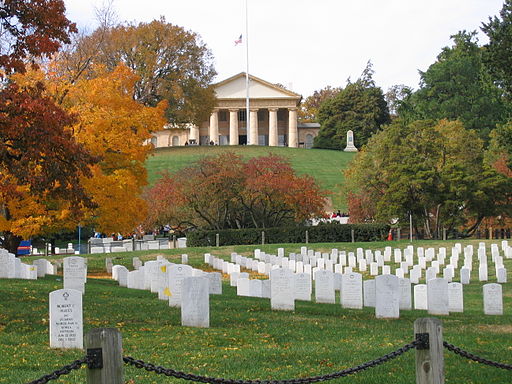 Arlington House, former home of Robert E. Lee and his wife, Mary Anna Randolph Custis, with Section 32 of Arlington National Cemetery in the foreground. Photo by Protoant.
Martin Luther King Jr. was the civil rights leader most instrumental in changing all that in the middle of the twentieth century, and for his accomplishments he has been nationally recognized with a holiday on the third Monday in January. Discrimination against black people was certainly nor restricted to the South, but since it was there where it was most culturally and institutionally ingrained, that was where Dr. King held his rallies, boycotts, and marches.

The regional holiday of Lee-Jackson Day is a holdover from the Jim Crow era, and for the people of that time, who could be open about their white supremacist views, the holiday certainly represented something less innocuous than the claims today’s Southern history enthusiasts make for it. Some of those Confederacy fans understand that, but they also understand that these days it behooves them to be less open about their views, in great part due to the legacy of Dr. King. Nowadays they are often as not passive-aggressive in defiance of others’ objections to their glorification of white supremacy, saying “Oh, does this [Confederate statue, battle flag, etc.] bother you? I’m so sorry to bruise your delicate feelings, Snowflake.”

Such people may be ignorant of the view of their hero, General Lee, who did not approve of memorializing the Confederacy because it would prevent wounds opened by the war from healing. It could be, however, that since they are not the ones who suffered any wounds, they lack the imagination or the empathy to understand Lee’s sentiment. Then there those who recognize the wounds in others and seek to keep them open, even salting them occasionally, because it gives them power or satisfies their spitefulness. Those are the ones who held rallies in Charlottesville, Virginia, in July and August of last year. Everyone should consider honestly then whose interests are served by propping up outdated and outmoded Confederate memorializing, whatever form it takes, and by relating a history of stars and bars while glossing over shackles and whips.
― Vita