A Spoonful of Honey

December 12, 2017 Isidore Gnome
In 1964 when the Walt Disney Studio made Mary Poppins, a spoonful of sugar may have helped the medicine go down in the most delightful way, but today honey has proven healthier and more effective in treating the symptoms of the common cold. Cough drops made with honey for soothing the throat, and mint or eucalyptus to clear sinuses are popular, as are herbal teas with a spoonful of honey added. Unlike sugar then, honey is a soothing remedy as well as a sweetener. 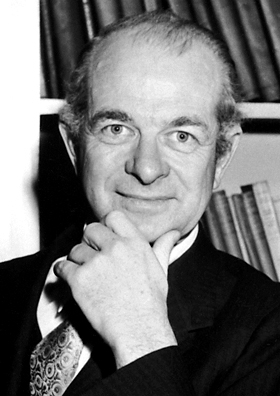 Linus Pauling in 1954.
Vitamin C is for many people another component of fighting off the effects of a cold, despite evidence it has no specific role in the fight. Being otherwise healthy and well nourished, a person with a cold has no need of supplementing their diet with extra vitamin C. Linus Pauling, an American who won two Nobel prizes in the mid twentieth century, the first for chemistry and the second for peace, exerted tremendous influence from the 1960s until his death in 1994 in asserting the value of vitamin C in alleviating cold symptoms or preventing the onset of a cold altogether. Pauling’s influence was so great that he not only boosted sales of vitamin C supplements, but inadvertently set the ball rolling for the entire nutritional supplement industry, resulting in the enormous sales displays at today’s grocery stores and drug stores.
Considering the variety of foods now available year round to consumers in wealthier countries, it’s questionable whether most nutritional supplements are necessary. Many people will nonetheless take a multi-vitamin every day on the grounds that it can’t hurt, as insurance. In addition to the outsized influence wielded by Linus Pauling, it could be that the idea of combating a cold with vitamin C is a holdover from the time when people in colder countries did not have ready access to fresh fruits and vegetables in the winter cold and flu season. Poorer people in particular would have seen their health deteriorate in the winter due to poor nutrition and a consequently weakened immune system. 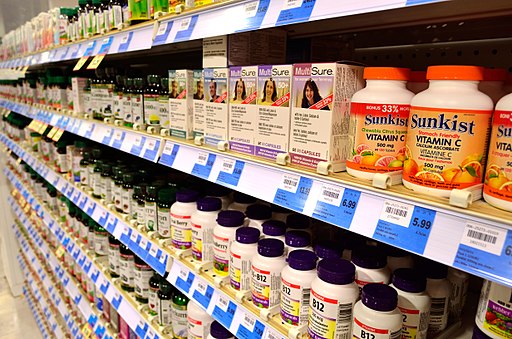 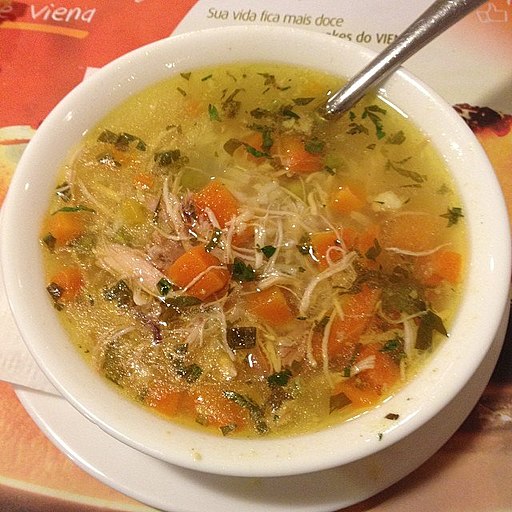 A bowl of Canja de galinha, or Portuguese chicken soup. Photo by Flickr user Sebástian Freire.
At such a time, the gift of an orange in a sick person’s Christmas stocking would have been most welcome. As long as the difficulties of transport to the north could be overcome, oranges, one of the few fruits available fresh after November, could supplement diets starved for fresh fruit all winter, not just at Christmas. Oranges are higher in vitamin C than other fruits commonly available in temperate countries, and therefore people might naturally jump to the conclusion that it was the lack of vitamin C, rather than poor nutrition generally, that contributed to susceptibility to colds.
An old remedy for cold symptoms that science has found real value in is chicken soup, due to its chemistry and the healthy effects on the respiratory system of steaming liquid both before and after ingestion. Doctors say liquids in all forms except those containing caffeine or alcohol are a good remedy for a cold. Herbal tea, chicken soup, hot chocolate, all are good. An aspirin or other pain reliever now and then for an adult is okay, but not for infants and toddlers, and aspirin not at all for children under 16. Honey also is not recommended for infants. Meanwhile, all the vitamin supplements in the world, vitamin C included, won’t help unless poor nutrition was a problem before the cold came on. The best way to avoid coming down with a cold in the first place? Good hygiene and healthy eating, including when a cold settles in despite everything. Feed a cold, and feed a fever. Starving never helped anyone overcome anything, unless they called the starving fasting, but then that’s a whole other story.
― Izzy