All the Time in the World

November 3, 2017 Techly DoRight
It was a little over 100 years ago when the Germans enacted the first daylight saving time as a measure to conserve energy, and the practice has been part of most of the western world in one form or another ever since. Besides the dubious argument that extending daylight at the end of the day through spring, summer, and early autumn saves energy, it’s hard to rationalize continuing the practice. Continue it will, however, for the time being, as daylight saving time ends on November 5th with the return to standard time over the winter in the United States and much of Europe.

George Pal’s The Time Machine, from 1960, explored questions of altering time and circumstance within a gripping adventure yarn.

Contrary to myth, daylight saving time was never instituted on behalf of farmers. Farmers are generally opposed to the practice. They would rather take back that hour of daylight from the end of the day in summer, when the heat of the day has built up, and return it to the beginning of the day, when the cool of the night lingers. It was office workers and the mercantile concerns that catered to them who had an interest in extending daylight past office hours, thereby opening up more time for shopping and other money-spending activities.

The energy conservation argument for daylight saving time was more valid a century ago, when inefficient electric lighting was a big consumer of power. Air conditioning did not become a factor until the 1930s, and then only for public buildings like theaters, department stores, and office buildings. Home air conditioning did not come into widespread use until the 1960s or 1970s. The situation then by the 1980s was that in the summer people were returning home from work at five, six, or seven o’clock in the late afternoon and early evening, when evening cooling had not begun to overtake the built-up heat of the day. If standard time had been in effect in the summer, those hours would have been closer to sunset by one hour, and therefore cooler. 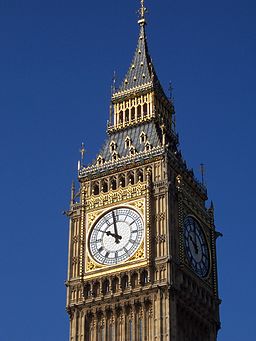 Big Ben in London, England, the most famous public clock in the western world, displays the time on a sunny day in September 2005. Photo by Robin Heymans.
By the late twentieth century, people no longer had to resort to public buildings to enjoy air conditioning. The argument then that people would take advantage of some extra daylight after working hours to circulate among shops and spend money was not as valid as it had been a half century earlier. The energy conservation argument similarly went out the window. People could and did go directly to their own air conditioned homes, where they cranked up the air conditioning to compensate for the day still being hot at five, six, or seven o’clock.

The original three singers of the vocal group Bananarama reunited recently, and in this performance of their 1980s hit “Cruel Summer”, they show great timing 30 years later.

What’s the rationale then for daylight saving time in the new climate, when an hour of summer sunlight at the end of the day is hotter than it used to be? Because we’ve gotten used to extended twilight in the mid-latitudes in summer? Using the extra daylight time at the end of the day can be nice for cutting grass after work, or coaching a children’s soccer game, or socializing with neighbors. People did all those things and more (substitute baseball for soccer) in the past, and life went on. Like farmers, office workers may find it more pleasant to arise a bit earlier to do some chores in the morning. Leaving daylight saving time behind will cost only a little in convenience and schedule readjustment, but the saving in energy will put dollars back in the pockets of everyone but the fossil fuel companies, and may help bring back the cool of the evening.
― Techly