August 29, 2017 Techly DoRight
When grocery stores were switching from paper bags to plastic bags for packing up customer purchases in the 1980s and 1990s, the clerks would ask the customers “Paper or plastic?”. At some point in the 2000s the question faded away and plastic bags became the default option. Some grocery chains no longer carry paper bags at all. Very few stores offer paper bags only, no plastic. The paper bag fell out of favor due to cost savings on material as well as on labor, as it requires less time and skill to pack a plastic bag than a paper grocery sack. Environmental costs for both are high, but people are discovering that costs for plastic bags after disposal are getting higher all the time since the plastic persists far longer than paper before breaking down into harmless components, if it ever does.
The humble paper sack that we take for granted today as just another everyday item began in 1871 with a patent taken out by Margaret Knight on a machine for folding and gluing paper sacks with flat bottoms. Her design was an improvement on an 1852 invention of another American, Francis Wolle, of a machine for making paper sacks shaped like large envelopes. The flat bottom that Ms. Knight added made the paper sack far more useful, and thereafter store clerks developed the skill of properly filling the sacks – heavy, durable items like canned goods on the bottom; light, fragile items like eggs and bread on top; double up the bags for weight or for items that might sweat moisture and compromise the integrity of a single bag. 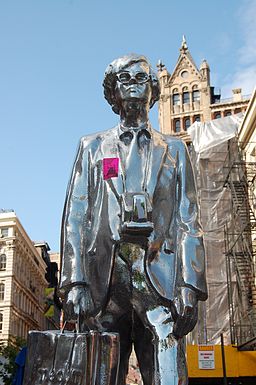 The Andy Monument at 17th Street and Broadway in New York City. The nearly ten foot tall chrome sculpture was created in 2012 by Rob Pruitt and is outside Warhol’s Factory building of the 1970s and early 1980s. Andy Warhol is depicted with his familiar Polaroid camera and a shopping bag, which would have been filled with copies of Interview magazine. Warhol used to stand in the street, signing autographs and giving away copies of his magazine. This shot, taken on May Day, shows Andy sporting a red May Day/General Strike sticker. Photo by Thomas Altfather Good. 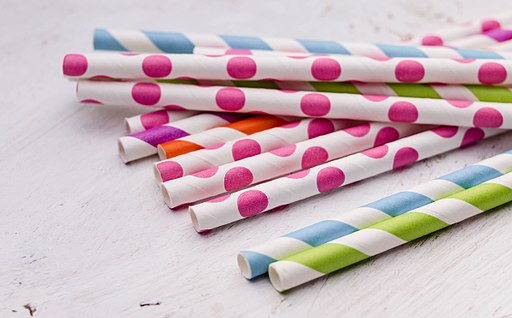 Paper straws like these were in general use until the late twentieth century, when plastic straws took over. Paper straws all but disappeared until recently, when a growing realization that plastic straws presented the same disposal problems as plastic bags prompted a comeback. Photo by Marco Verch.
Bagging up groceries in plastic sacks requires no such skills because only a handful of items will fit in each, and unlike paper, the plastic presents no difficulties handling moisture. The plastic bags we have gotten accustomed to using once and throwing away were invented by Sten Gustaf Thulin in the early 1960s for a Swedish packaging company. They came into widespread use in this country in the 1980s, and then store clerks had to start asking the paper or plastic question of every customer. Switching from paper to plastic seemed like a good idea at the time. Trees would be saved, and the high environmental cost of processing wood pulp into paper could be avoided. The plastic bags? They were each so thin and flimsy that surely the environmental costs of producing them had to be lower than cranking out paper sacks.
A disturbing scene from the 1931 film Frankenstein, directed by James Whale, with Boris Karloff as The Monster and Marilyn Harris as Little Maria.

On the front end, yes, that turned out to be true. But those thin, flimsy plastic bags took awhile to accumulate in their billions and then trillions, in landfills and in the oceans, where, unlike paper bags, they stubbornly refuse to deteriorate for years, maybe generations. They just accumulate, posing a threat to wildlife on land and in the sea. In the United States, recycling plastic grocery bags has never topped 10 percent of the total used. They are thin, they are flimsy, and therefore as far as most people are concerned, to the extent that they think about it all, they are one time use items. Like Dr. Frankenstein with his creation, The Monster, we invest most of our intellectual energy and talents in the invention, and very little in contemplation of the long term consequences of our ingenuity, which, unintended though they may be, afflict us after our formulations have broken loose from us, as all creations eventually do, and roam the countryside causing havoc.
― Techly