This Land Is Our Land

August 27, 2017 Vita Historia
The “Unite the Right” rally in Charlottesville, Virginia, on August 12 ended up being more about the neo-Nazi version of white supremacy than the purported issue of memorials to the Confederacy and whether or not they represent another version of white supremacy. Despite that difference, it hardly matters to the victims whether white supremacy is rooted in Nazism and World War II or slavery and the Civil War. The neo-Nazis merely co-opted the issue of removing a statue of Robert E. Lee from a public park in order to further their own hateful agenda.
The backlash to the rally in Charlottesville has had the effect of expediting removal of Confederate memorials around the country. Instead of preserving memorials to the Confederacy, an issue which the neo-Nazis obviously had an interest in only as a flash point, the effect of their demonstration has been to bring to the attention of the general public the real purpose of many of those memorials and why it is a good idea to remove them. The majority of the statues, for instance, were put up in the Jim Crow era, often outside courthouses, and it is clear from dedication speeches of the time that the statues were meant to serve the dual purpose of preserving the memory of the rebellion as well as reminding black people and their few white allies that the old guard was still in charge, no matter what the Constitution of the United States had to say about equality of the races. 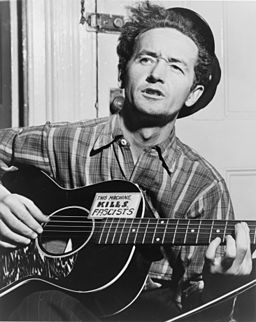 Woody Guthrie (1912-1967), writer of “This Land Is Your Land”, performing in 1943. The sign on his guitar says “This machine kills fascists”. Photo by Al Aumuller of the New York World-Telegram.
Another bump in confederate memorializing came during the Civil Rights era of the 1950s and 1960s. Through the Jim Crow era assertion of the old order and then reassertion during the Civil Rights era the rest of the country took little note of the symbols being put up all around the South. Visitors might think some of the memorializing was odd to the extent that they noted it at all, but for the most part they put it down to a “Southern thing” in which it was best not to interfere. The region’s inhabitants, black and white, surely understood why the memorials were there, though some of the white people among them chose to gloss over their uglier meaning by looking at them only as symbols of plucky defiance against Northern aggression, ignoring the centrality of slavery to the conflict, which was written down in the Declarations of Secession by their own leaders. 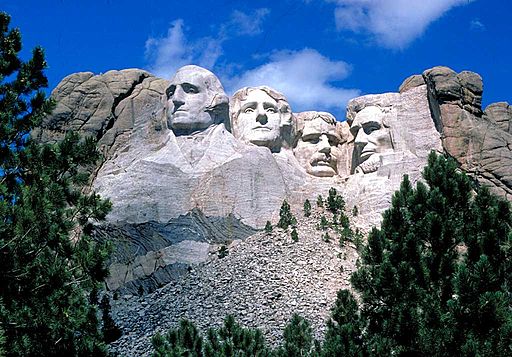 Mount Rushmore in the Black Hills of South Dakota, a region sacred to many Native Americans.
Now that the issue of Confederate memorials’ role in asserting white supremacy has come to national attention, it is perhaps time to start examining white supremacy memorials in every context across the country. The idea expressed by the neo-Nazis at Charlottesville that white people have an inherent right to lead this nation and subjugate other groups is self-evidently asinine. Native Americans are the only true Americans, and they of course are not white people. It is entirely unlikely at this point, however, that hundreds of millions of people, black and white, African and European, will board ships and return to their lands of origin, much as the real Native Americans may wish that at least some troublemakers would do just that.
Like it or not, this land is now populated by one big, argumentative family. Some of us hate each other, and it appears that will always be so, but the idea that one group of the family, namely white people – and in particular a subset of privileged white heterosexual males – should continue to dominate the others is an evil premise. Stow your petty, self-pitying grievances and move on, so that when we all get together for Thanksgiving we can have peace in the family.
― Vita