The Check Is in the Mail

August 8, 2017 Vita Historia
At the end of the Cold War between the Soviet Union and the United States, which can be dated to the fall of the Berlin Wall in November 1989, there was much talk in the West of a “peace dividend” on account of the anticipated reduction in military spending. The dividend never amounted to anything as far as average Americans were concerned, particularly since the Gulf War came along a year later, and then through the 1990s the US involved itself in flash points around the globe in its self-appointed role as world police force. In the new century, the so-called War on Terror has preoccupied this country and dragged it into middle eastern quagmires ever since 2001. That peace dividend looks like it’s never going to show up.

Counting minor skirmishes and interventions, America has been in conflict with enemies foreign and domestic for most of its history. Always in the past after a major conflict, the military would draw down its personnel and weaponry and return to a reduced level that was considered the peacetime military norm, even if small conflicts were bound to flare up. Again after World War II, it appeared the armed forces would follow the pattern and draw down, and indeed they did for several years in the late 1940s. But then the Berlin Airlift happened, heightening tensions with the Soviet Union, and more or less beginning the Cold War. Shortly after that came the Korean War. The country has pretty well been on a war footing ever since, a condition President Eisenhower warned against in his 1961 farewell address when he spoke of the military-industrial complex. 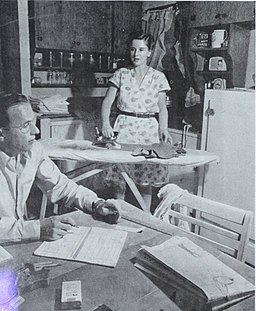 From The Ladies’ Home Journal in 1948, an article in the magazine described the trials of a young family making ends meet. Here the father balances the family books while the mother irons clothes. No doubt they juggled income and expenses in the hundreds or thousands of dollars, not billions or trillions.
In a 2012 speech at the Democratic National Convention, President Obama anticipated a peace dividend from reductions in American involvement in Afghanistan and Iraq, a dividend he said he would use to pay down the national debt and put Americans back to work repairing and improving infrastructure at home. Like the Cold War peace dividend, the dividend that was supposed to follow from over a decade of middle eastern wars also proved illusory. For one thing, our enormous military spending, larger than the military budgets of the next eight biggest spenders combined, has been done with borrowed money. Claiming a reduction in military spending would yield a dividend from the balance is like a homeowner taking $20 out of the household budget meant for repayment of various debts and calling it a windfall. Not only will the homeowner have to repay the $20 next month, but he or she will have to come up with an additional $20 to make up for the shortfall.
The other thing about this country’s huge military is that some interested parties in the military and in the defense industry like to keep it sky high. That is what Eisenhower was warning us about in 1961. These are people who, while they may not like war exactly – when it comes to actual military service, for instance, a good many of them seem to have other priorities – nonetheless have acquired a taste for the profits and power of the military-industrial complex. They are the friends of Halliburton and Blackwater, and they are in high places. They are the people who will see to it a peace dividend never gets beyond their own sticky fingers into the wallets of the American people who have paid for all their boondoggles.

From Mel Brooks’s 1974 film Blazing Saddles, with Harvey Korman and Robyn Hilton, and Mel Brooks himself as the Governor, this scene could just as well be depicting activities in the modern day Oval Office as in a fictional governor’s office in 1874. Warning: foul language.


There will not be enough money in the federal budget for fixing the nation’s infrastructure, moreover bringing it up to 21st century standards, until the obscene amounts spent on the military-industrial complex are drastically reduced. There will not be enough money for health care, for public education, for Social Security, for fighting climate change by ditching the fossil fuel industry in favor of renewable energy, for doing all the things we want to do to improve our society as a whole, and not merely improve the fortunes of the oligarchy, if we do not come to our senses regarding our budget for interfering around the world and in some unintended ways making it a more dangerous place. Throwing all that borrowed money into the war machine for the past 70 years has bought us a grand house, with a grand mortgage to match, and meanwhile the termites have been busy at the foundations.
― Vita