Beauty Is as Beauty Does

August 4, 2017 Isidore Gnome
Driving along a newly opened or renovated highway, a motorist is apt to see young trees newly planted beyond the road shoulders or in the median, if the road has one. That’s a fine thing, except it occurs to the motorist that it’s the height of summer, daily high temperatures are in the 90s, and besides the meager contribution of hit or miss thunderstorms, there hasn’t been any measurable rainfall in weeks. Why did the landscape contractor plant those trees at such a time and subject them to such misery?

Economics are the determining factor rather than the health and survival of any individual tree. A homeowner with a quarter acre lot may have six or eight trees on it, and understandably with numbers like that the health and survival of each tree is important to the homeowner. A landscape contractor charged with planting trees along miles of highway may be dealing with six hundred or eight hundred, or even thousands of trees. The industry standard is to expect losses in the 30 to 40 percent range within the first three years, which is the typical length of the maintenance contract after planting. That’s two hundred trees dying within three years out of six hundred originally planted. 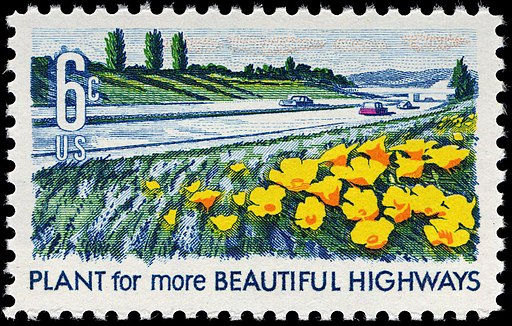 1969 U.S. Postal Service stamp designed by Walter D. Richards.
The landscape contractor is constrained to replace dead trees within the three year maintenance window, and of course the anticipated costs are included in the contract. It all seems like such a waste. Nature itself is wasteful, of course, because not every young tree survives to maturity, particularly not ones that sprout along a baking roadside in the middle of summer. Still, wouldn’t it be better for the trees if the contractor waited until autumn to plant them?
For the trees, yes it would, but again economics are the deciding factor. For most landscapers, at least the ones who care less about hiring knowledgeable staff and more about just having able bodies on hand, labor is relatively inexpensive. The cost of replacement trees has already been included in the contract. What is expensive is hauling water out to the trees and looking after them. If regular rains come along after planting, even if the weather remains hot, then so much the better. That goes into the profit column. The contractor may have other, more profitable work already lined up for the prime fall planting season. The summer highway job was a good filler to keep the crew and business going in what is normally a slow season for planting.
It would be better if economics weren’t focused entirely on the short term and instead looked down the road more. When Lady Bird Johnson pushed for the Highway Beautification Act in 1965, she no doubt saw it as a way to improve the nation’s roadsides over the blight of too many billboards and unscreened junk yards, and it was. Her efforts on behalf of the environment both during her tenure as First Lady and afterward were probably the greatest contribution to the nation of any First lady in the twentieth century. She influenced state and local highway departments in establishing standards for roadside plantings. Those standards, however, could use some revision. 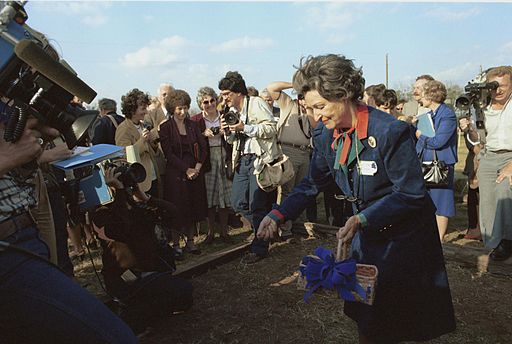 The second revision to regulations bears on the competence of landscaping companies. By the appearance of the results along too many highways,  communities and highway departments seem to be awarding landscaping contracts on the basis of just about anything but competence. Would they award a building contract to a construction company whose buildings habitually failed within five to ten years? Unfortunately, that is what they do when they award a contract to a landscaper whose slipshod planting and mulching practices result in tree failure beyond the usual three year maintenance replacement window. Some problems with trees take several years to manifest themselves, and often the problems are due to the incompetence of the landscaping contractor. Knowledgeable input from local tree stewards and arborist societies about the competence of various landscape contractors during the process of awarding contracts would most likely improve the efficiency of the subsequent plantings over the current 30 to 40 percent rate of failure and make Lady Bird Johnson proud (and as they say in the South, “Bless her heart“).
― Izzy