July 16, 2017 Isidore Gnome
“Someone is sitting in the shade today because someone planted a tree a long time ago.”
― investor Warren Buffett, known as the “Oracle of Omaha”.

If you have to be outside in the heat of a summer day, there is no sweeter relief than the shade of a large, spreading tree. Even staying indoors you can benefit from a shade tree if it helps cool the building you’re in, reducing the need for air conditioning. The first six months of this year have been the second warmest on record in the lower 48 states, after 2012. The National Weather Service accounts for climate data from 1895 onward, and according to their records 2016 was the warmest year of all. 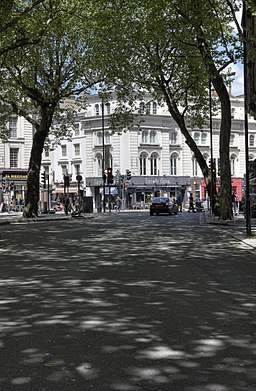 Trees and shade in London, England; photo by TomasEE.
Drought has not developed as widely this year as in the recent past. The northern Plains states and southern Arizona have been hit hardest with drought this year, but elsewhere rainfall has been adequate. When it’s very hot, sufficient rainfall to keep plants, and especially trees, alive is crucial to mitigating high temperatures in the short and long terms, and maintaining trees as counterweights to further warming. A mature shade tree such as an oak can transpire over a hundred gallons of water in a day, drawing it up from it’s roots and losing it to the atmosphere from it’s leaves. Drought stresses trees and makes them vulnerable to pest problems, and if dry weather continues for several years in a row, the decline and death of trees can be due as much to pest damage as to lack of water for metabolic processes.
Summer is not the best time to plant trees because heat stress makes keeping up with watering difficult, but it is a good time to plan for planting in the best season, autumn. Balled and burlapped trees have been grown in a field, dug up with a root ball at least two or three feet wide and tall, and then the root ball wrapped in burlap to retain moisture until replanting. Such trees are tempting to buy because they promise shade sooner since they are bigger than container-grown trees. There are a number of reasons to resist the temptation.
Balled and burlapped trees are more often than not never root-pruned in the field, with the result that when the nursery digs up the tree, they cut off almost all the fine, fibrous roots at the outside of the tree’s root zone, and those are the roots which do the bulk of water and nutrient uptake for the tree. Because they are bigger than container-grown trees, balled and burlapped trees are more expensive to purchase. They are also more expensive to maintain for the first several years after replanting because they need intensive care on account of having to regrow fibrous roots. Until then, balled and burlapped trees will often not grow at all, and will even be surpassed in size and vigor in many cases by initially smaller container-grown trees. 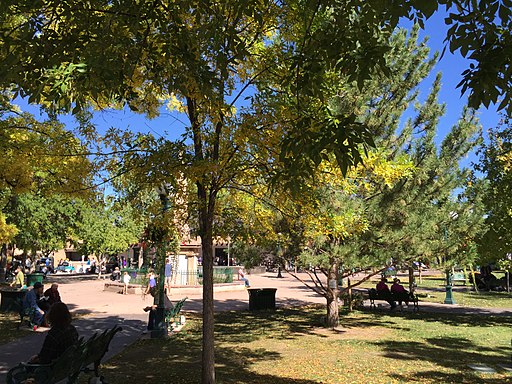 Trees provide shade at the Santa Fe Plaza in New Mexico; photo by WikTalksmart.
The reason is trees grown in containers have all or most of their fibrous roots. You can check this with a gentle tug on the trunk to see if there is some resistance to coming out of the container. Some unscrupulous nurseries will dig undersized field-grown trees and pot them up, knowing they could not sell them as balled and burlapped trees. Such trees will give little resistance to coming out of the container unless one or more of the large anchor roots is stuck in the side. There will be minimal fibrous root development. Another, perhaps simpler way to check for fibrous roots is to brush away some of the potting soil, making sure to replace it (when doing these tests, be gentle and put things back the way they were). 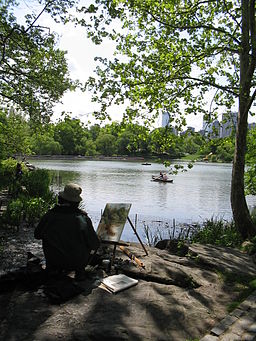 Artist painting a picture in Central Park, New York City; photo by SpyON.
Whatever tree you buy and however it was grown, when you get it home, dig a ten dollar hole for a five dollar tree, but don’t overdo it or the tree will never try to extend its roots beyond the hole. Give it a little compost in the backfill and keep a light hand on the fertilizer. Water deeply and mulch lightly, and don’t pile the mulch up against the trunk, no matter how many “professional” landscapers you’ve seen do it! For as long as you take care of your tree, keep grass and other plants at least several feet away from the trunk, which will not only reduce competition for water and nutrients, but eliminate the possibility of mechanical damage from mowers and trimmers. Planting the right tree for your location will help reduce its need for extra water as it matures, though when absolutely necessary in the hottest, driest part of the summer, by all means give it water if you can. In time, your tree will reward you or someone in the future with cool relief from summer heat.
― Izzy