July 30, 2017 Vita Historia
For the second time in a week, the current President, the Thug-in-Chief, made despicable assertions in a speech before an organization of uniformed members, bringing them down to his level, though in the case of the cops and cop cadets he addressed on Friday, they did not have as far to fall as the Boy Scouts he spoke to on Monday. In his Friday speech at Suffolk County Community College in Brentwood on Long Island, New York, the current President advocated police brutality in the treatment of criminal suspects in custody, to cheers and applause from his audience. It’s impossible to excuse either the statement or its reception, but in the President’s case disrespect for the rule of law and for basic decency is to be expected, while the cops and cop cadets should know better. 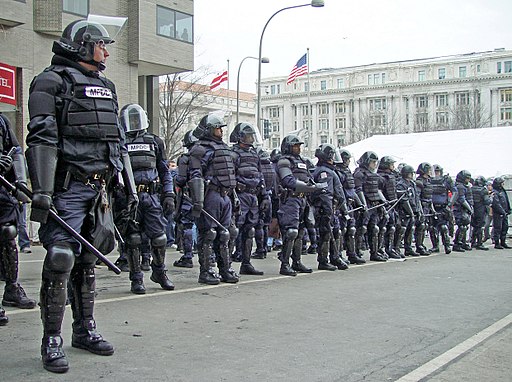 Police in riot gear blocking a checkpoint into the Washington, D.C. parade route at George W. Bush’s second presidential inauguration on January 20, 2005; photo by Jonathan McIntosh. Militarization of the police effectively circumvents the Posse Comitatus Act of 1878.
The presumption of innocence is not stated outright in the United States Constitution, but it is implied in Article I and in several of the Amendments. There is also a long history of the presumption of innocence in common law, and in judicial precedent in the United States. The current President thinks he knows better, and is prepared to act as judge, jury, and executioner whenever he feels the urge, and now he has encouraged the police to do the same. In May 1989, he took out a full page advertisement in the New York City papers inflaming the populace against the Central Park Five, teenaged males who were suspects in the brutal rape and near murder of a female jogger in Central Park two weeks earlier. The five youths were convicted in 1990 and sent to prison.
Eleven years later a man stepped forward, claiming he was the lone perpetrator of the assault. After an investigation by the Manhattan District Attorney, the convictions of the Central Park Five were vacated by the New York Supreme Court the following year, in 2002. The Central Park Five, now free men in their thirties, sued the city for $250 million, ultimately settling for $41 million in 2014. Through all these investigations and the subsequent lawsuit, in which it became clear the young men’s confessions were coerced by the police, the vulgarian who became president of the country in the 2016 election not only refused to apologize for his inflammatory rhetoric against them, but refused even to acknowledge he had been wrong. As for his blanket call in his full page ad for the police to exercise overly broad, even illegal authority, it’s obvious from his recent remarks that he hasn’t changed his noxious opinion.

In the 1960s TV show Dragnet, the Los Angeles police detectives Joe Friday and Bill Gannon, played by Jack Webb and Harry Morgan, respectively, may be corny, but they display a better grasp of the rule of law and basic decency than the current President. Perhaps if they had known what was in store for our country, they might have talked to him in this video clip. Still, it’s doubtful any of it would have sunk in.

Rhetoric encouraging police brutality, when it comes from the head of the executive branch of the federal government, the branch entrusted with enforcing the nation’s laws, is unfathomably irresponsible. At a time when incidents of police brutality, non-judicial executions, and trampling of citizens’ Constitutional rights are making headlines nearly every day, such stupid remarks from the Vulgarian-in-Chief grant permission for cops all over the nation to do more of the same without fear of repercussions, indeed to do so with the excuse that they were just following orders. That’s an excuse with an old, despicable history, and if it becomes acceptable here then we will at last have shut the door on our free society with an echoing, prison cell clang.
― Vita