It Hurts to Laugh

July 28, 2017 Editor
“Have you no sense of decency, sir? At long last, have you left no sense of decency?”
― Joseph N. Welch, chief counsel for the United States Army, addressing Senator Joseph McCarthy on June 9, 1954, at the Army-McCarthy hearings.
The new White House Communications Director, Anthony Scaramucci, has been in office only one week and has already demonstrated his incompetence, stupidity, and villainy. He could stand in at this point for the entire administration, and for that reason alone he will turn out to have been the perfect choice as front man. The assorted crooks, con men and women, and dastardly back-stabbers making up this administration would be comical if they weren’t capable of doing such great damage in this country and the rest of the world. The best thing that can come of this, short of seeing the lot of them in jail before too long, is a peaceful retreat from the world stage and empire. Let’s hope it’s the quiet retirement of an American people who have come to their senses.
― Ed. 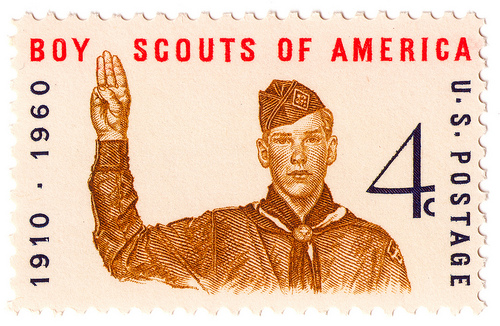 Boy Scouts 50th Jubilee stamp, with art by Norman Rockwell (1894-1978). The current president of the country addressed the Boy Scouts at their annual Jamboree on Monday, July 24, with a partisan political speech which sullied the standards of the Boy Scouts and brought them down to his level.
In this May 12, 1955 episode of the television quiz show You Bet Your Life, host Groucho Marx does his best to draw humor from an interview with an odd, unsettling contestant.
Government Americans, Anthony Scaramucci, Army, Army-McCarthy Hearings, Boy Scouts of America, Communications Director, Empire, Groucho Marx, Joseph McCarthy, Joseph N. Welch, Norman Rockwell, President, Senators, White House, You Bet Your Life