July 11, 2017 Vita Historia
Paying off a mortgage is a wonderful thing, and something that is more remarkable now than it was forty or fifty years ago. Tighter lending standards since the burst of the housing bubble in 2008, and the Great Recession that followed, mean fewer people are qualifying for mortgages now, but the people who currently have mortgages are less likely to ever pay them off because low interest rates mean they will refinance at least once, resetting the clock.
Until the 1930s, mortgages were an uncommon way to purchase a house, and mortgages with 15 or 30 year terms were unheard of. House buyers put as much as 50% down, and the mortgage was for three to five years, all of it interest. At the end of the term, a balloon payment for the remaining principal was due, and it’s not surprising there was a high default rate. The federal government changed the mortgage market in the 1930s by stepping in and insuring lenders against the risk of default on certain approved loans, and later by buying those loans to sell as securities in financial markets. 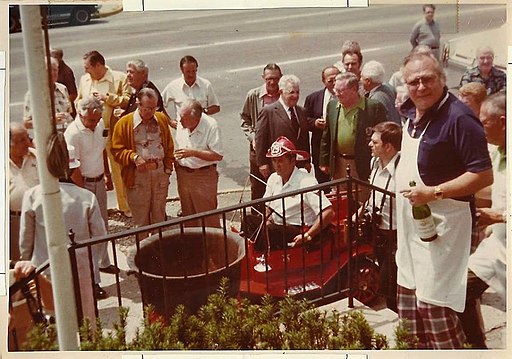 Mortgage burning party of the Antelope Club of Indianapolis, Indiana, in June 1977; photo by Sheariner.
The modern mortgage market followed from those New Deal policies and the establishment of the Federal Housing Administration (FHA). After World War II, the Veterans Administration (VA) gave another boost to home ownership rates by insuring mortgage loans to veterans with no down payment. The demand for new housing was so great that mass production methods came to house construction and the firm of Levitt & Sons built what would be called Levittown on Long Island, New York, a planned community of over 17,000 houses they built between 1947 and 1951. 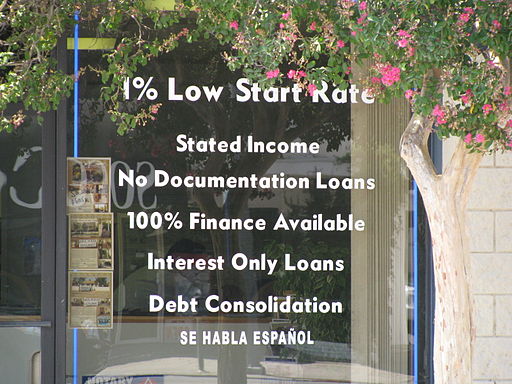 The window sign of a mortgage lender in July 2008, offering subprime mortgages; photo by The Truth About.
Housing and mortgage markets stayed healthy through the 1970s, but by the 1980s they turned down when interest rates spiked past 10% nearly to 20%, and wages for middle and working class people started stagnating, as measured against inflation. As home ownership rates slipped, the federal government in the 1980s and 1990s deregulated the financial sector of the economy, loosening restrictions on lending, and especially on the financial instruments related to mortgages. For Wall Street, the doors to the candy store had been flung open.
Home ownership rates hit an all time high by 2005, when the bubble was inflated to its biggest extent. That’s not surprising considering all the shady wheeling and dealing going on at the time. What’s also not surprising was what happened next, when the bubble burst – millions of new homeowners defaulting on their mortgages and the housing market tanking; while the Wall Street financiers, and the federal legislators and regulators who were supposed to keep a watchful eye on them, all walked away with hardly a scratch.

The Wall Street people and their media mouthpieces tried to blame the homeowners for taking on more debt than they could afford. Meanwhile, the taxpayer bailout of Wall Street in 2008 and 2009 did almost nothing to help those homeowners. They weren’t bailed out. No trickle down economics for them. Through all that, the wages of middle and working class people that started stagnating in the 1980s have stayed flat. People who acquired a 30 year mortgage in the 1990s, when the market was turning up, still have to make their payments each month.

From the Monty Python’s Flying Circus television show on the BBC in the late 1960s and early 1970s.

Meanwhile, their other costs of living have gone up, such as the student debt for their children who may now be, in the 2010s, graduating from college. That’s assuming they can help their children pay for college; if not, the children will be saddled with such an onerous debt upon graduation they may not feel ready for a mortgage of their own until they are in their 40s. Who can blame current homeowners (in name only, and not in deed), these indentured servants, these wage slaves, for continually turning to their homes as a source of funds by refinancing again and again, to the point they will never have a mortgage burning party? The only economic positives they see are the low interest rates that make refinancing an attractive, and maybe a sole, option for clinging to the American Dream.
― Vita