When We Were Okay

June 13, 2017 Vita Historia
“For what shall it profit a man, if he shall gain the whole world, and lose his own soul?”
― Jesus Christ, quoted in the Gospel of Mark, 8:36, King James Version.

For many Americans in the growing lower class and shrinking middle class, the American Dream of their parents and grandparents no longer means the same things or presents the same possibilities. How can it, when they have been either treading water or slipping beneath the waves for over a generation now? In 1971, the middle class was 61 percent of the population, and the lower class was at 25 percent. In 2015, the middle class had slipped to 50 percent, while the lower class had increased to 29 percent. What group had increased it’s numbers the most at the expense of the middle class? The upper class increased from 14 percent in 1971 to 21 percent in 2015. Those numbers reflect population shifts within income groups; the shifts of actual income have been proportionally even greater.

Cass Elliot sang this version of the old standard “Dream a Little Dream of Me” when she was with The Mamas & The Papas in 1968.

We hear a lot lately about American Exceptionalism, as if it was somehow tied in with the American Dream. But that is an unfortunate misconception. American Exceptionalism, as invoked by modern politicians, isn’t much more than the Manifest Destiny of the nineteenth century or the pushy nation meddling and nation building of the twentieth century. We’ve got a lot of crust, telling everybody else what to do and how to live just because we think we’re special. Of course, all that political proselytizing is merely a cover for corporations to grab resources and exploit cheap labor abroad. They don’t “hate us for our freedoms”, they hate us for our hypocrisy and our meddling.

Back home, where we belong, the American Dream is a noble sentiment when it refers to a better life through hard work, education, and civic virtue. According to the Gospels, those are values Jesus Christ spoke of many times. The American Dream has not historically meant “grab all you can and the Devil take the hindmost”. It is truly amazing how many wealthy Americans profess Christian values, yet in their actions do little or nothing to uphold them. 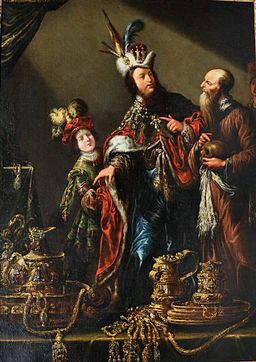 Croesus Showing Solon His Treasures, a painting from the 1630s by Claude Vignon (1593-1670) and his workshop assistants. Croesus was the famously wealthy King of Lydia in the sixth century, BCE, and Solon was a renowned Athenian lawgiver.
Those wealthy hypocrites, the money-changers, are the ones who need their taxes raised to 1950s levels. They are the ones whose overseas tax shelters and corporate headquarters need to be brought back home, where they belong. They are the ones whose profiteering from the military-industrial complex needs to be severely curtailed by bringing the troops back home and closing down the more than 1,000 military installations overseas. Those troops could be put to work in this country repairing infrastructure, and then given a proper GI Bill for their education. There is a long laundry list of other things that need doing to return this country not to when it was “great”, which bespeaks the hubris of the American Exceptionalism that has caused so much trouble for us and the world, but to when the middle class at least was okay, and with a prospect for the lower class of getting better. To start, stop glorifying the wealthy. They don’t need your help, unless it’s to carry their water.

A scene with Harvey Korman and Mel Brooks from Brooks’s 1981 movie History of the World, Part 1, depicts his vision of France before its revolution in the eighteenth century. Twenty first century America is not there yet, but we’re closing in on it. Warning: foul language.
― Vita