Watching Out for Number One

June 16, 2017 Techly DoRight
After numerous high profile cases of questionable use of deadly force by the police in the past few years, the cry has gone up from the public and from politicians for more widespread use of police body cameras to augment the already prevalent use of dashboard cameras in police cars. The technology does not present a difficulty since data storage capacities have skyrocketed and battery strength in a compact device has increased enough to allow recording over an eight hour shift. The difficulty is with how human beings implement the technology and whether the technology will improve how police interact with citizens.
There is evidence that when police wear body cameras the incidences of police violence and abuse of authority declines. That is, the incidences decline when a rigorous protocol for the use of the body cameras is instituted and enforced by civil authorities and police management. In some places, the police have body cameras but their use is left too much up to individual officers, and that naturally leads to the officers recording only the encounters that they calculate will make them look good. A lax protocol like that amounts to none at all. The American Civil Liberties Union has put out an excellent article detailing the best ways to deploy police body cameras and the drawbacks their use may entail. 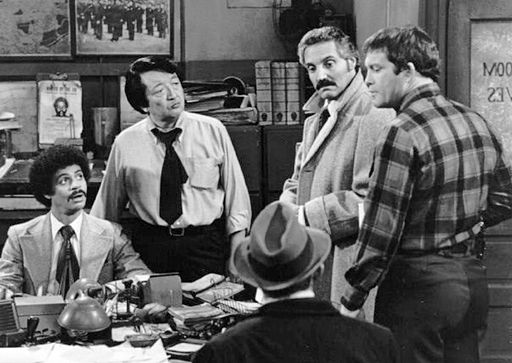 1974 cast photo from the television series Barney Miller. Clockwise from left: Ron Glass (Ron Harris), Jack Soo (Nick Yemana), Hal Linden (Barney Miller), Max Gail (“Wojo” Wojciehowicz), Abe Vigoda (Phil Fish) (back toward camera). The show took place in the fictional 12th Precinct in Greenwich Village, New York City. Over the years since its initial airing in the 1970s, police have praised the show as a more realistic portrayal of day to day police work than many higher octane TV shows and movies.
It’s not surprising that police behave better when they know they’re being watched. The question is why they bear watching. Certainly police work isn’t like warehouse work; police work is often stressful, with the ever present possibility of a dangerous encounter, and by its nature the work involves dealing with other people every day in an environment that can be hostile. That’s the job they volunteered to do. No one drafted them. The fact that it’s not relatively placid like warehouse work is therefore no excuse for police officers acting like dangerous loose cannons when the going gets tough, and definitely not when they feel like going off on someone for some piddling reason that they will later claim “made them fear for their life”. As the saying goes, you knew the job was dangerous when you took it. 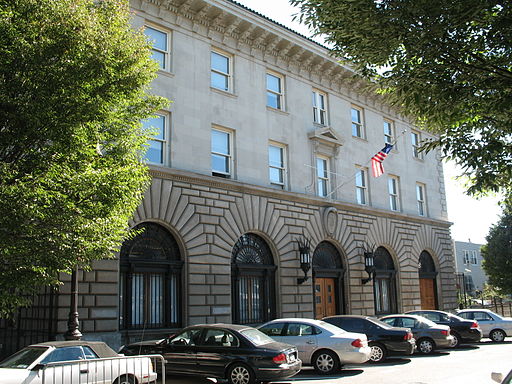 The former 41st Precinct Station House at 1086 Simpson Street in Foxhurst, The Bronx, New York, in the summer of 2007. The building was formerly known as “Fort Apache” due to the severe crime problem in the South Bronx; photo by Bigtimepeace.
The real problem is lack of accountability for officers who behave criminally, and a police culture that from academy training onward instills an “Us vs. Them” mentality. Body cameras are all well and good, and as a purely technological answer to the problem they are excellent, providing privacy issues for both the officers and the public are addressed. But body cameras will take the solution only halfway, if that. Until the public demands that criminal police officers face the kind of punitive and fiscal penalties everyone else in society must face, we’ll continue to see the same violent, bullying behavior from some cops. Paid administrative leave (a paid vacation for being a jerk!) and penalizing the taxpayers with a fine is not going to do it. How could anyone in their right mind, excepting a police union boss, expect otherwise?
The matter of police culture is harder to address. It starts with training and continues with taking away all the militaristic toys police departments have acquired in the past forty years, and most of that in the past twenty. No, you are not a soldier on garrison duty in a hostile foreign country. You are a police officer – a peace officer, if you will – at home amongst your fellow citizens, friends, and neighbors, vile as some of them may seem to your law abiding heart. Playing dress up in GI Joe gear with full body armor and intimidating your fellow citizens with armored personnel carriers and other cool stuff should not be part of the job description. Changing that macho police culture won’t happen, however, until the public stops living in fear of every little thing, handing over far too much authority, money, and blind obedience to a group of men and women meant to be our servants and not our masters, some of whom unfortunately respond to the situation by puffing themselves up with arrogance and steroids, looking and acting like goons any sensible person would run away from, rather than the friendly cop on the beat, a fellow citizen instead of an overseer.
― Techly