The Pigeon and the Chestnut

May 16, 2017 Vita Historia
Scientists are attempting to bring the Passenger Pigeon, Ectopistes migratorius, back to life from preserved genetic material. The Passenger Pigeon once numbered up to 3 billion in North America, but by 1914 the last one had died at the Cincinnati Zoo. Scientists are also working on reviving the nearly extinct American Chestnut, Castanea dentata, which had once totaled over 3 billion trees in North America before a bark fungus accidentally imported from Asia with some Chinese Chestnuts, Castanea mollissima, destroyed almost all of the trees in the first half of the twentieth century. 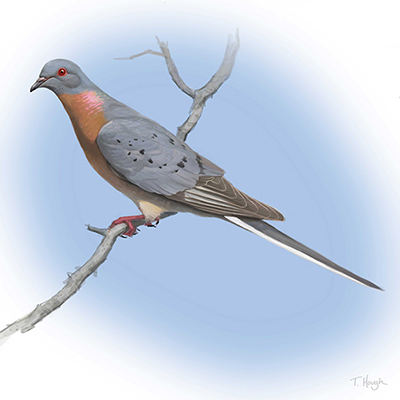 American Chestnut tree in central Maryland in 1914; photo by United States Forest Service.
The loss or near loss of both these species greatly changed the ecosystem of eastern North America to the point that a visitor time traveling from the nineteenth century would be hard pressed to recognize it as the same place, never mind all the modern infrastructure of concrete, steel, and asphalt. Both species were casualties of the first stages of globalization. The Passenger Pigeons had co-existed with Native Americans for millennia, but it was the mass immigration of Europeans which eventually drove them to extinction through habitat loss and hunting on a massive scale. The American Chestnuts had no immunity to the fungus which arrived with the shipment of Chinese Chestnuts, which had developed some immunity due to having evolved with the fungus in their native habitat.
Now scientists are attempting to restore these two species once so numerous that they helped define the environment of eastern North America. Both restorations will require the expertise of geneticists, along with help from ornithologists and botanists, as appropriate. Ultimately the success of both projects will depend on the cooperation of the public by giving both species space and peace, two things that humans struggle to allow for the other beings sharing this planet. People were responsible for the demise of both the Passenger Pigeon and the American Chestnut, and with the ingenuity people are known for perhaps they can restore both species. Successful restoration will also require two things people have not often enough been known for, which are a generosity of spirit towards life and restraint of their violently destructive impulses.
― Vita