April 7, 2017 Isidore Gnome
Every gardener will at one time or other have to contend with wildlife or neighborhood pets causing problems in their yard and garden. Vegetable gardens are especially apt to be browsed by wildlife, obviously, and the legal options for backyard gardeners in coping with unwelcome visitors are much more limited than the options available to a farmer whose livelihood is at stake. Today as in the past a farmer can dispose of a varmint chewing up his or her crops with a well-aimed shot from a .22 caliber rifle and law enforcement or neighbors are unlikely to interfere. That option is not generally available to the urban or suburban gardener tending a small plot in close proximity to neighbors’ houses.

What is a varmint? A varmint is any animal whose survival habits conflict with your own, just like a weed is a plant out of place. Some people are thrilled to see deer browsing in their back yard, at least for a while, but to others those same deer have long since crossed over into varminthood after they have eaten hostas down to the ground, nibbled away rosebuds on the cusp of bloom, and used their antlers to rub the bark off young fruit trees, killing them. Garden enemies are not limited to deer, although they are probably at the top of most peoples’ lists, and a by no means complete catalog of varmints would for most folks have to include groundhogs (woodchucks), gophers, rabbits, rats, mice, voles, moles, chipmunks,  skunks, dogs, cats, poisonous snakes, raccoons, opossums, squirrels, inattentive drivers, and unsupervised children.

Bill Murray as a golf course groundskeeper in the 1980 movie Caddyshack plots the destruction of the gophers who have been disfiguring the fairways and greens.

For some of these varmints, the critter kind, there are no shortage of chemical and mechanical repellents manufactured by companies eager to help out a distressed gardener and incidentally make a buck on a continuing basis, because all of them require regular re-application or constant tweaking to keep up their effectiveness. Gardeners who have wised up to this laborious and expensive treadmill may look instead to fencing, the only truly effective solution, though effective only in the sense of diminished and insecure expectations. No fence is a 100% effective deterrent for all critters at all times in all situations, as any convict will tell you, although in this case the malefactors seek to break in rather than out.

Some gardeners will try to remove the problem from the garden by relocating it, or by hiring someone to do so. Although this practice is illegal nearly everywhere, the gardener can feel smugly humane about it. Unfortunately, it is a poor strategy for everyone concerned. The varmint, let’s say a groundhog, is trapped in a humane trap, but sometimes the animal injures itself in some way in its panic to escape. Injury to a wild animal is often a slow death sentence. The gardener, or his or her proxy, then takes the groundhog out to some countrified place and releases it, feeling good about him or herself, even if the groundhog begs to differ. This is likely another slow death sentence for the groundhog, because for one thing it is not familiar with the new territory, and for another the territory, if it is any good, is likely already occupied by another groundhog or two who will not treat an interloper kindly. The gardener then, with a warm and fuzzy feeling brought on by reflecting on the newfound happiness of the groundhog he or she has just released to frolic in fields of daisies in the countryside, returns home where another groundhog from a neighboring yard eyes the newly unoccupied territory and its fresh crop of tasty vegetation.

There are all sorts of other strategies for dealing with varmint pressure on the garden, such as companion plantings or planting only things offensive to them. It can seem the options come down to living in a fenced-in or foul-smelling compound, or giving up on planting old garden favorites like roses and daylilies. There is another option involving compromise and a relinquishing of control, and in the end it may be the only sensible option whether the gardener is willing to acknowledge it or not. It doesn’t mean giving up, but merely giving in where other options are inhumane, or too expensive or unsightly, or just plain idiotic insistence on controlling every little thing. The critters – varmints, if you insist – have just as much right to be here as we do, and that’s true whether you want to acknowledge it or not. Putting up a fight is fine, but try to retain perspective on who is supposed to be the rational creature capable of long-term, ethical considerations.
― Izzy 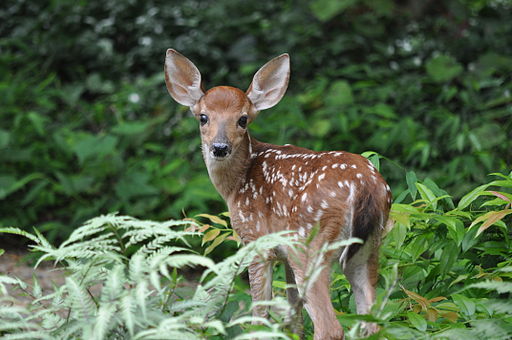