All Honest Work Has Dignity

March 26, 2017 Editor
“No business which depends for existence on paying less than living wages to its workers has any right to continue in this country.” ― President Franklin Delano Roosevelt, 1933. 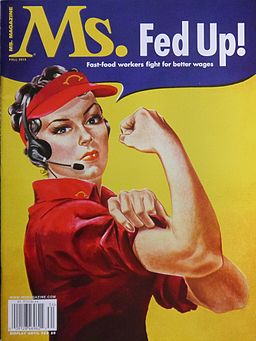 Ms. magazine cover – Fall 2013. Cover by Liberty Media for Women, LLC.
Whether a person works at a computer in an office or scrubs floors in an office building, all honest work has dignity and deserves respect and the worker deserves a just, living wage. This concept, noted in ethical and religious teachings throughout history, and codified in legal and humanitarian documents in the United States and other countries, has been honored more in the breach lately because of growing income inequality which exalts the obscenely overpaid executive over the line worker on whose back the executive rides. The Fight for $15 movement has shaken up the situation over the past few years, but in the current political climate it appears that raising the minimum wage to a living wage will be left entirely up to the states. It’s similar to the situation of addressing human-induced climate change or greed-induced health care reform, where the federal government is paralyzed by ideologues and corporate shills, and if meaningful action is to be taken at all it has to be taken by the states.
It was in the 1980s that we first started to see many adults, and even some retirees, working in fast food joints on the line, rather than just in management. At the time it was jarring to see the retirees working in that environment, wearing the hideous uniforms and taking orders from people less than half their age. We have since gotten used to the sight as another token of the diminished expectations of the new service economy. The statistics on fast food workers show the average age has increased to 29, up from the 1950s and 1960s when the majority of workers were indeed teenagers. Nevertheless the perception clings of awkward youths working behind the counter temporarily for spending money while they lived with their parents before moving on to maturity in the pursuit of a higher wage American Dream. Nowhere is there a mention in law or religion that a worker’s wages are an unimportant, trifling matter because they are not needed for basic support, but that is the justification service sector companies, and fast food companies particularly, use to explain why they pay a majority of their workers the stingy federally mandated minimum wage, or a tiny bit more. 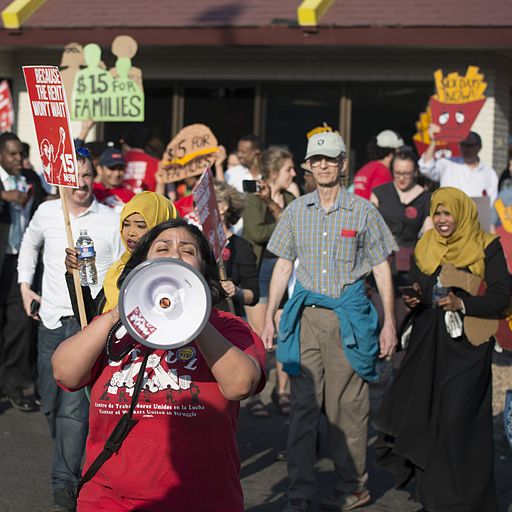 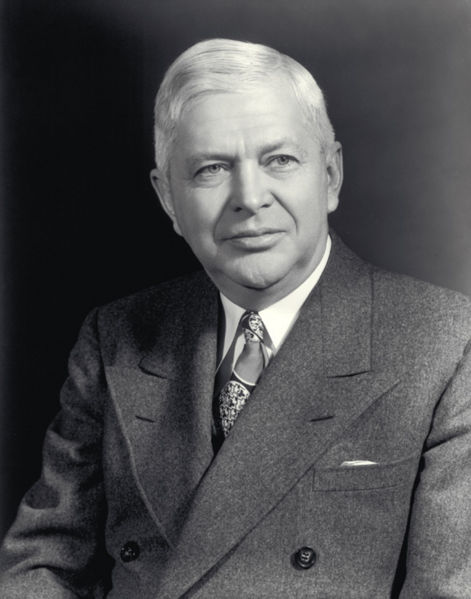 Charles Wilson at GM, 1948. Wilson was the head of General Motors from 1941 to 1953, when President Eisenhower selected him to be Secretary of Defense, a post in which he served until 1957. In 1950, at the height of American economic power, Wilson was the highest paid chief executive in the country at $586,100, or about $5.6 million in modern terms. He paid 73 percent of that income in taxes – $430,350. General Motors in 1950 was a major driver of American prosperity, and its workforce was highly unionized.
What might have been a fair wage for a teenager in the 1950s and 1960s, one who was decidedly uninterested in joining a collective action to seek a higher wage for his or her temporary job, is not a fair wage for an adult supporting an adult’s responsibilities over the long term in 2017. If fast food executives are going to engage in moral relativism regarding the wage scale for their workers, then they need to apply it even after the demographics have changed and no longer work in their favor. They also need to explain how it is they can’t afford to pay their workers more, yet they can pay the typical CEO at a rate 1,200 times that of the average worker, a rate which outstrips the ballooning income inequality throughout the rest of the American economy. It wasn’t like that back in the Good Old Days, back when America was Great. But of course they haven’t addressed those questions. Instead they’ve claimed they’ll have to raise prices, which will drive away customers, which will cause them to drop workers and turn to automation where possible. Is it honest, dignified work then to cheat your employees, to cut corners on your customers, to chisel on your taxes, all so that you can present an attractive financial statement to your shareholders and stuff your own already overflowing pockets with more money?
― Ed.