January 1, 2017 Editor
“Whoso would be a man must be a nonconformist.” ― Ralph Waldo Emerson
It’s easy to be a nondescript face in the crowd, to blend in, to not rock the boat. It takes no courage at all. It takes courage to stand out, to fold your arms when everybody else is saluting, to take a knee when others go with the flow. Dissent is not un-American, it is at the core of what it means to be an American. 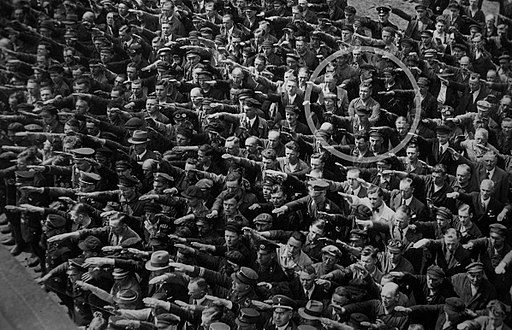 A crowd in Hamburg, Germany in 1936 give the Nazi salute,
except for August Landmesser, circled, who folds his arms in protest.
The corporate oligarchy in charge of the United States has co-opted “Support our troops” to undermine dissent from nonconformists against military adventurism overseas. Constant war keeps the profits rolling in for the defense industry and helps the oligarchy control the domestic population by curtailing civil liberties in the name of national security. Pressure from the crowd to support jingoism takes on the colors of patriotism when the oligarchy cynically whips up their fervor with “Support our troops.” That is a phrase which, like the phrase “States’ rights” when used to support Southern secession in the American Civil War, takes on some clarity and cuts through the emotional fog wreathing it when we append to it a questioning clause. States’ rights to do what? Continue slavery? Support our troops in doing what? Enforcing the agenda of the oligarchy?

At home, criticism of the Black Lives Matter movement is used to divert attention from the real need for police reform. Criticism of authoritarian, militarized, unaccountable police is co-opted by talking about and booing the nonconformist protesters of the abuses committed by those out of control police. There is no logic to this; it is all emotion used for manipulation. This is stepping through the looking glass. This is like diverting attention from the revelations about the misconduct of government officials at home and abroad published by WikiLeaks by making the conversation about Julian Assange and speculation about his sources instead. Personalities, not critical analysis of public policies, are what the mainstream corporate media are selling. America, love it or leave it, the mass of faces in the crowd bellow in return.

Blessed Are the Peacemakers by George Bellows, a
1917 anti-war cartoon depicting Jesus with a halo,
wearing prison stripes, and in a sidebar a list of His seditious crimes.
So fold your arms when you feel the need, stand out when you have to, and take a knee when that seems the best course. It won’t be easy, but it will be necessary.
― Ed.

“The hope of a secure and livable world lies with disciplined nonconformists who are dedicated to justice, peace, and brotherhood.” ― Martin Luther King, Jr.