We Are Controlling Transmission

“It seems odd that every day we hear about a new smartphone app that lets you do something innovative, yet these modern-day mobile miracles don’t enable a key function offered by a 1982 Sony Walkman.”
― Ajit Pai, the new chairman of the Federal Communications Commission, in a speech he gave at a North American Broadcaster’s Association symposium on February 16, 2017.


If you have a smartphone, you might not be aware it has a chip in it that allows it to receive FM radio broadcasts. The phone manufacturers include the chip as a matter of course for all phones worldwide, and then coordinate with the carriers about activating it or not. In the United States, only about 44% of smartphones have activated FM radio chips, according to Mr. Pai. There are smartphone applications available that take advantage of the FM radio chip in the phone, and downloading and trying to use one of those applications is a way of determining if your carrier has activated the chip. Most likely, though, if you don’t see an application for “FM radio” already installed on the phone, then the chip is not activated. 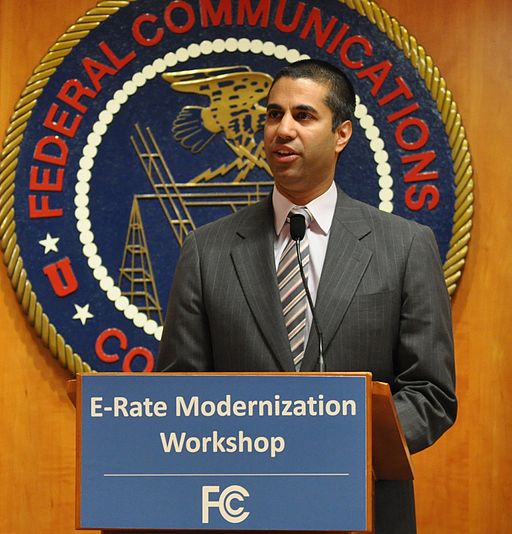 
Since the chip is already in the phone, why would the carriers not want it activated for their customers? Activation costs them nothing, after all. The carriers are suspiciously silent on this issue, which allows the rest of us, their paying customers, to speculate on their motivations and judge them harshly. Cellular phone companies are in the business of selling internet access along with phone service. Even though their phone contains a chip capable of receiving FM radio, most smartphone users can only access FM radio stations through an application such as TuneIn, which uses the internet to tap into a station’s streaming service, if it offers one. That sells data for the carriers. If your phone could access FM radio directly, your carrier would get nothing.

“We are controlling transmission.”

Besides saving data when accessing FM radio without using the internet, smartphone owners can expect longer battery life because their phone is not constantly using its transmitter to talk to the nearest cell tower the way it does when streaming media. The screen and the transmitter of a smartphone are the two biggest battery drains. Ownership of the phone brings up another issue – if it’s your phone, and it has the capability of receiving FM radio, your carrier should not be able to prevent you from using that feature. It appears the motivations of the carriers come down to greed and arrogance. Shocking!

To be fair, not all carriers disallow FM radio service and some of them disallow it only on some of their phones. No one understands why, because the carriers, who are in the communications business, are not talking. Some carriers don’t even bother to acknowledge there are public safety benefits to their customers of having access to FM radio outside of internet or cellular service during and immediately after a natural disaster, when those two services might be out of commission. The best course of action for smartphone users is to bring pressure to bear on their carriers, who up until now have been relying on the ignorance of their customers to get away with their policy. When you bought your phone, did your carrier advise you that it contained an FM radio chip? Most likely not, because then they would have had to explain why they wouldn’t let you use it. Take back control and make them explain themselves to you here and now.
― Techly 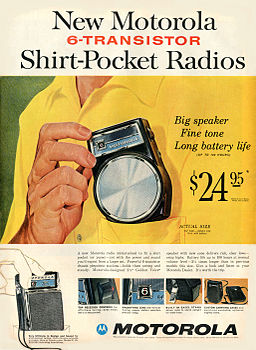 An early transistor pocket radio by Motorola. The first Motorola brand automobile radio was produced in 1930. Motorola began the commercial production of transistors at a new $1.5 million facility in Phoenix in 1955. This advertisement is from the May 23, 1960 issue of Life magazine (page 13). The 1960 price of $24.95 translates to a little over $200 in 2017.