March 27, 2018 Editor
In a perfect world where people are always well-behaved and courteous and the bluebird of happiness accompanies them throughout their day, the zipper merge would work as harmoniously as traffic engineers envision it working. In practice, the zipper merge rarely works well, and instead it becomes a place where jerks can take advantage of the polite behavior of others in order to cut in line. Everyone who drives is familiar with the traffic setup, but not everyone may be acquainted with the term “zipper merge”.
A zipper merge refers to the area of road where one or more lanes end, and all traffic must move into the remaining open lane or lanes, such as in a construction zone. A similar situation presents itself where one lane of a road becomes an exit, with warning signs posted that the lane is for exiting only. Traffic engineers refer to these areas as zipper merges because ideally that is how they want drivers to conduct themselves where a lane closes down or where an exit lane is about to leave the main roadway. Like a closing zipper, cars in adjacent lanes should politely alternate merging together into the one open lane, making use of the closing lane as much as possible. 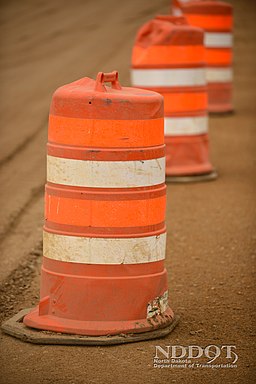 Every driver recognizes these orange barrels as the lane markers in road construction zones, but not every driver reacts to them the same way, much as traffic engineers would like them to.
It’s a neat theory, and when it works as proposed it is a fine thing. “After you, sir.” “No, I insist, madam, you go first.” “Ah, very well, I shall do so then, and a fine day to you, sir.” “My pleasure, madam.” And a tip of the hat to you, too. Usually, however, most drivers who see the warning signs about a lane closure will move over to the through lane early, queuing up. The zipper merge happens in a sense, but farther back from the closure than engineers envisioned it. This polite behavior by most drivers is admirable because it invokes the manners ingrained in many people from early in life, but it has the effect of leaving a stretch of open road in the closing lane, and that is a temptation for jerks.

Not all drivers who take advantage of the open lane are jerks in their own eyes, because it is as hard for a jerk to recognize his own jerky behavior as it is for a fish to understand it is swimming in water. There are many rationalizations available to jerks, after all, the most prominent one provided by the traffic engineers who designed this scenario. The jerk reasons as he zips past everyone waiting patiently in line and then cuts in at the front “We’re supposed to use all of the closing lane up until the very end, but the idiot sheep lined up over there don’t understand that!” he would be more hesitant to try the same maneuver in a long store checkout line, but here in this situation traffic engineers have by default endorsed predatory driving, and therefore the jerk sees it as okay.

The exit lane situation is designed into the roadway, rather than being an ad hoc situation due to construction, but it promotes the same kind of selfish behavior. A multiple lane road in town loses one lane to an exit, and at times when the traffic is heavy there may be a long line of slowly moving cars in the lane which will eventually veer off the main road. The opportunistic jerk assesses the situation and, instead of dropping into line at the back, where cars are moving slowly and obviously intend to exit, continues at speed in the lane adjacent to the exit lane until he sees his opening near the front, shortly before the exit lane leaves the road, and swoops in, as often as not using his turn signal, as if that made his shark move alright. “Hey, I’m signaling! Let me in!”

There’s not much that can safely be done about zipper merge jerk behavior other than rage against it or hope that traffic engineers get their heads out of the clouds and figure out a better way to design merge zones, one that takes into account actual human behavior in the real world. Tom and Ray Magliozzi, the auto mechanic brothers who conducted the Car Talk call-in radio program on NPR until 2012, when elder brother Tom’s failing health forced them to discontinue the show, had a caller on one show that they reran in 2015 who had a question for them about using the open lane in a zipper merge. The show was Episode 1538: “Aberrant Behavior Syndrome”, and the caller was Brian, from Kentucky, who called in at about the 11:30 mark of the show. Brian wasn’t absolutely a jerk, even if he did rationalize using the open portion of a closing lane at the expense of his fellow drivers, but Tom and Ray – especially Tom – set him straight in a most definitive and entertaining manner, and their reasoning goes beyond the misconceptions of traffic engineers and the pushiness of jerks who look out only for themselves.
— Ed.