At a partisan political rally in Mississippi on Tuesday, the Troll-in-Chief entertained his audience of trolls with mockery of Christine Blasey Ford, who had testified before a Congressional committee the previous Thursday about an alleged sexual assault Supreme Court nominee Brett Kavanaugh and his friend, Mark Judge, had perpetrated against her in 1982. The crowd of trolls at the rally revived the “Lock her up” chant from the 2016 presidential election campaign, this time referring to Ms. Ford rather than to Hillary Clinton.

What did Ms. Ford have to gain by giving her testimony and subjecting herself to sneering from the Oval Office Oaf and his cadre of morally warped minions? What does Mr. Kavanaugh have to gain by avowing his innocence other than the crown jewel of his ambition, a seat on the Supreme Court? Encouraged by their Chief Manipulator, the trolls at the Mississippi rally laughed at Ms. Ford and her testimony while taking Mr. Kavanaugh seriously. It’s difficult to fathom the hardness of heart and smallness of spirit it must take to attend one of these rallies and show support for such a Cancerous Leader. 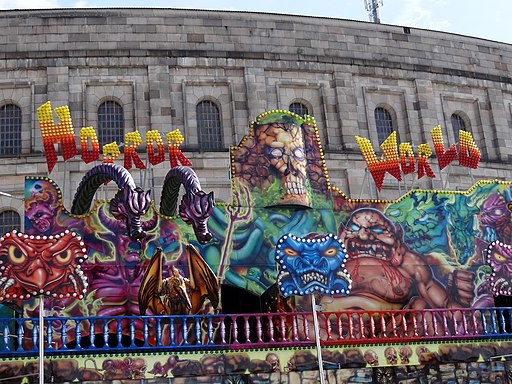 Horror World Circus Exhibition outside Nazi-Era Congress Hall in Nuremberg, Germany, in August 2012. Photo by Adam Jones, Ph.D.
Before this political and social nightmare progresses to its foul end, there will be divisions within families and among friends and neighbors on a scale not seen in this country since the Civil War. If Cancerous Leader manages to consolidate his power in the elections of 2018 and 2020, then the divisions will be more like those in Nazi Germany, where a minority of sociopaths cowed the majority of decent people into silence about their casual cruelties and major abuses of power.

A compilation of clips from a 1961 episode of The Twilight Zone, titled “Five Characters in Search of an Exit”, written by Rod Serling, and starring William Windom as the Major and Susan Harrison as the Ballerina.

There will be similarities, but not exact resemblances as the United States fashions its own brand of totalitarianism based on worship of the Almighty Dollar. People will have to ask themselves, as some no doubt already have done, how can I possibly remain on good terms with that family member, that friend, that neighbor, when they support such foul rhetoric and willingly follow such despicable and cruel policies? Why should I, and how could I, without abandoning my principles, my self-respect, and the defense of their victims, among whom I can eventually almost certainly number myself?
— Ed.