August 8, 2019 Techly DoRight
Anyone who uses the internet regularly has likely encountered a CAPTCHA or reCAPTCHA gatekeeper at a website requiring a login, and the puzzles they present to the user are meant to distinguish human visitors from bots, which is a good idea. Another good idea from the standpoint of Google, or Alphabet or whatever they’re calling themselves these days, is the use of unpaid labor from solvers of the puzzles to train artificial intelligence for tasks such as digitizing books or driving cars. 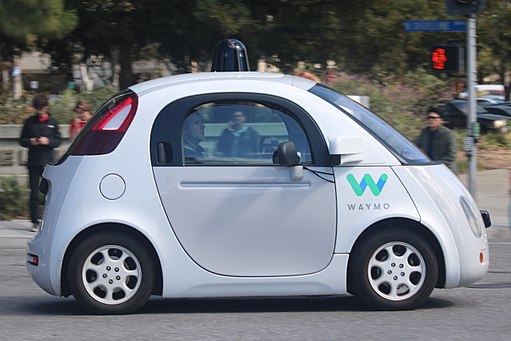 A Waymo self-driving car on the road in Mountain View, California, headquarters of Google, or Alphabet or whatever they’re calling themselves these days. Waymo is a division within the technology behemoth, and logically it would be filed under “W”. Photo by Grendelkhan.
Ten years ago, internet users mostly encountered CAPTCHAs, which stands for Completely Automated Public Turing test to tell Computers and Humans Apart. CAPTCHAs were text-based puzzles, and Google put people to work solving them in the interests of both internet security and of training artificial intelligence to recognize letters and numbers in all sorts of peculiar configurations, such as might be found in all the books Google was digitizing. Now reCAPTCHAs are more common, and they are handy for training self-driving cars because they are image-based, and the images are most often of street scenes.
No doubt the engineers and executives at Google count themselves as quite clever for employing digital security puzzles to help amass the enormous amount of data necessary to train artificial intelligence without spending a penny, at least for labor. It’s a good bet most internet users are unaware of their exploitation at the hands of that technology behemoth or of other ones, like Facebook, which uses photographs uploaded by its users to train facial recognition software. Of those who are aware of what’s going on, some may not care. The technology companies, in that case, have little concern for the possibility of a public outcry over their exploitative practices; people are so eager to hand over their personal data for purposes they perceive as benefiting themselves that they don’t notice or don’t care how the companies are using the mountains of freely given information.

Artificial intelligence requires so much data to be effective that not even all the free data sneakily gleaned from internet users is enough, and therefore the technology companies have to pay some laborers, however poorly, to do the monotonous tasks necessary to train artificial intelligence for every imaginable scenario. The weakness of artificial intelligence, being nothing more than an extremely powerful computer, is its incapability of imagining scenarios outside of logic, or of imagining anything at all. Powerful as it is, it is still only a number cruncher.

John Cleese in conversation with Appian CEO Matt Calkins at a technology conference in 2018. In another video, John Cleese demonstrates the leaps of imagination and intuition that set the human brain apart from artificial intelligence.
Google’s reCAPTCHA sometimes gets the wrong message from its images, for example by insisting a diagonally striped no parking zone is a pedestrian crosswalk. There is no arguing with it. All the internet user can do in order to move on then is play along with the error or try reloading a different image. One has to wonder if training one’s replacement for free is not enough of an indignity without also suffering the insult of having to humor an insufficiently intelligent automaton that is nonetheless a humorless and dully unimaginative know-it-all.
— Techly