September 17, 2017 Techly DoRight
“. . . To promote the Progress of Science and useful Arts, by securing for limited Times to Authors and Inventors the exclusive Right to their respective Writings and Discoveries . . .”
― an excerpt from Article I, Section 8 of the United States Constitution.

Recently the pharmaceutical company Allergan cut a deal with the St. Regis Mohawk Tribe of upstate New York to hold the patent for one of its drugs in order to protect the company from patent challenges. The reasoning behind the deal is that since Native American tribes have sovereign immunity from some types of lawsuits under the 11th Amendment to the Constitution, Allergan is protecting itself from expensive and sometimes unwarranted litigation relating to its patent. In return, the St. Regis Mohawk Tribe will receive millions of dollars up front, and millions more in royalties. Since this is a new type of arrangement, it’s unclear how well it will hold up in court. 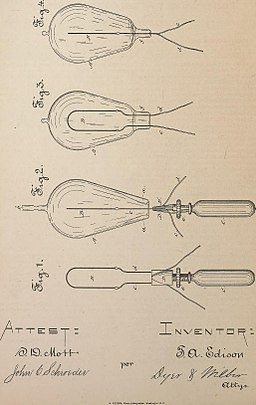 Illustration for an 1881 patent granted to Thomas Edison for an improvement to the incandescent light bulb he had first patented in 1880, itself an improvement built on the work of Canadian inventor Henry Woodward. Edison collected 2,332 patents worldwide, many of them for incremental improvements such as the one pictured here.
Patent infringements and patent challenges are nothing new, but with the explosion in technical innovations, new drugs, and medical devices in the past thirty years or so, the amount of infringement and challenge cases in the courts have exploded as well. Widespread patent trolling is a new phenomenon, tying up court dockets with often tenuous claims by some patent holders that their patent rights have been violated by another party.
The troll in this circumstance is usually an affiliation of lawyers sometimes known as a Non-Practicing Entity (NPE), which does not make or sell anything, but collects patents for the leverage that gives them in either extracting (extorting) licensing fees or lawsuit settlements from other parties. The patents used suit the purpose because they are overly broad and general, leaving plenty of room for interpretation by the courts, and the victims are often small to medium sized businesses which can’t afford the millions in lawyers’ fees and court costs it would take to defend themselves, instead choosing the easier and cheaper route of ponying up the licensing fee to the troll.

It’s hard to find fault with the St. Regis Mohawk Tribe for agreeing to the deal with Allergan. Native American tribes are often poor, their reservations pushed onto marginally productive land, and if they can take advantage of their status as sovereign nations within the United States to make some money, then more power to them. That same sovereign nation status, after all, has usually proved a mockery as European immigrants violated treaty after treaty with the Native Americans in pursuit of land and natural resources, taking what they liked with military force if words would not suffice.

Allergan, on the other hand, is doing what American companies seemingly do best, which is to cleverly exploit a loophole in the system. Whether Allergan is protecting itself from trolls or planning on doing the trolling itself from its newly purchased protected perch, that is yet to be seen. Large companies, such as Apple, can be both targets and perpetrators, though as perpetrators it’s often in the sense of patent infringement rather than trolling.

This cartoon of a “self-operating napkin” machine by Rube Goldberg originally appeared in the September 26, 1931 issue of Collier’s Magazine.
There’s plenty of gray area involved, and that’s where legislators need to step in to more clearly define the lines and reduce the amount of trolling lawsuits. Congress has acted in the past several years by changing the laws in favor of genuine innovators and against NPEs. More needs to be done, such as making the loser in a lawsuit pay the legal fees of both sides if the judge determines that one side has acted with intent to harass and extort the other.

This film of less than two minutes demonstrates Wallace’s endless enthusiasm for Goldbergian contraptions, much to the dismay of his dog, Gromit.

Some states have enacted such legislation, but where the case gets decided in a federal court, such as would be the situation should Allergan get challenged or challenge another party, the proceedings are not as clear due to fluid interpretations of the 11th Amendment. It appears that besides tightening up the rules governing patents, the next step is for Congress and the States to clarify the 11th Amendment to take away the sovereign immunity loophole. It’s unfortunate that Native American tribes would be denied a source of revenue, but patent parking really is a shady deal that needs to be stopped before it goes too far, similar to what has happened with the entrenchment of offshore tax havens for corporations.
― Techly