April 6, 2018 Editor
Telling someone off, no matter who they are and how high and mighty they may seem, is as American as apple pie. In fact, the more important a person purports to be, the better for all concerned in our society that someone tell that person off sooner or later, either before or after they get too big for their britches. That’s democracy. Last October, when Juli Briskman was out for a bicycle ride in Sterling, Virginia, and the motorcade of the Duffer-in-Chief passed her on the road on their way back from yet another weekend on the links, Ms. Briskman exercised her rights as well as herself by flipping off the Duffer and his motorcade. Her gesture was every bit an expression of American freedom as the “thumbs up” gesture the Duffer favors using, or even the one where he points to the person next to him in an awkward and strange display of his dominance.
Ms. Briskman is now suing her former employer, Akima, a federal contractor in the facilities maintenance business, for unlawful termination in order to collect legal fees and the severance pay they promised, but never gave her. Akima’s management used the excuse of an obscene social media posting by Ms. Briskman to fire her, because she posted the photo of herself flipping off the president’s motorcade after it had already circulated widely through the news media. She was making a political statement on her own time when she flipped off El Presidente, and she posted the picture on her personal social media account, with no reference to the company she worked for, yet the Akima bosses saw fit to throw her under the bus once it became widely known she worked for them, a federal contractor seemingly at the mercy of the whims of El Presidente. 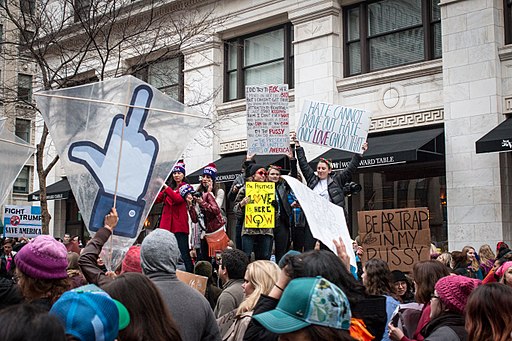 The Women’s March on January 21, 2017, in Washington, D.C., one day after the installment of Spanky the Pussy Grabber in the Oval Office. Photo by Liz Lemon.
It’s unfortunate Ms. Briskman lost her job over her political statement, though considering how Akima management reacted it is perhaps best for her in the long run to get away from those people. What’s particularly interesting about the lawsuit she is bringing against them is the effect it may have on employers’ control over their employees lives outside of work. There has been a trend toward companies’ monitoring of employees’ social media accounts, and whether the companies or the public disapproves of any individual’s social media postings or political activity outside of work should be immaterial under the First Amendment to the Constitution. It is worth noting the irony that the Supreme Court, with its 2010 decision in Citizens United, upheld the notion that the political campaign expenditures of corporations qualify as free speech, with protection under the First Amendment, yet there has been no Supreme Court ruling on the broad capacity of corporations to intimidate their employees when it comes to the employees expressing themselves freely on their own time.

People are free of course not to work for such corporations, just as they are free not to work for a corporation like Sinclair Broadcasting, which forces its employees to spout the company line over the airwaves on the company’s time, whether they agree with it or not. The problem comes when these companies acquire undue influence throughout their particular industry, and can then effectively blackball not only dissent, but the dissenters as well. That’s where the courts are supposed to step in to protect the rights of individuals, the rights that are codified in many laws from the Constitution’s Bill of Rights on down to state laws against discrimination and unequal treatment of all sorts. But it’s expensive to fight large corporations in court. The corporations know that, and they will often act in that case in what they perceive as their own best interest, letting the legal chips fall where they may, which often as not happens to be in their favor.

A fine display of the art of telling someone off in the 1992 film Glengarry Glen Ross, from the play by David Mamet about real estate salesmen, and starring Al Pacino, Kevin Spacey, and Jack Lemmon. Warning: foul language.

There ought to be a better way, and in fact there was a better way at one time. It was called “unions”. Corporations have non-disclosure agreements, arbitration agreements, end-user license agreements, and any number of other agreements in legalese meant to tie up individuals one by one and render them powerless against the mighty corporation with its cadre of lawyers on retainer. An individual such as Juli Briskman has to rely on a GoFundMe campaign in order to go to court to ensure her rights are respected, and to be able to pay the fees of attorneys working on her case as well as necessary household expenses while she looks for a new job. She is actually lucky, in that her case has generated sufficient publicity to get people interested in donating to her cause. Most people have to fight on their own, falling back on scanty resources. Unions, as corrupt and inefficient as some of them were, helped keep corporations in check, and now that the unions are almost entirely gone there is no check remaining on the corporations, not with the government in their pockets, and so now they seek to control every aspect of our lives, economic, social, and political.
— Ed.