Where the Magic Happens

July 25, 2021 Editor
Ever since the Centers for Disease Control and Prevention (CDC) issued guidance on May 13 of this year that people fully vaccinated against COVID-19 no longer need to wear masks in most indoor settings, while unvaccinated people should continue to wear masks, a magical thing has happened in this country, and that is the huge increase in vaccination rates everywhere, as evidenced by how few people are still wearing masks indoors in any setting. Before May 13, the fully vaccinated percentage of the population stood at about 35 percent; after May 13, it appears that percentage leapt to upwards of 70 percent. Incredible! Herd immunity achieved overnight! 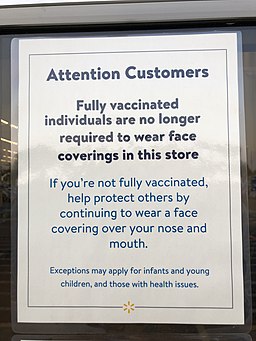 A sign regarding mask policy at a Walmart in Chantilly, Virginia, on May 20, 2021, shortly after the CDC issued new guidelines. Note how the wording does not require unvaccinated customers to wear a mask as a condition of entering the store. Photo by Famartin.
It’s heartening to look around at fellow citizens in shops, grocery stores, and restaurants and assess by an eyeball estimate that even more than 70 percent of adults appear to be fully vaccinated. In some places around the country, the number of fully vaccinated adults could even be as high as 90 percent, based on visual estimates. What’s holding the vaccination numbers back for the total population is the lack of a vaccine suitable for children under 12. In some shops, young children are almost the only ones wearing masks.
The CDC has statistics putting the nationwide percentage of fully vaccinated people at about 50 percent as of late July. Fake news! Anyone can waltz into their local big box store, where signs at the entrance clearly advise unvaccinated customers to don masks before entering, and see with their own eyes that the CDC’s numbers don’t tell the whole story. The CDC must be gathering data from people outside of stores, or even from ones who never set foot indoors at a public venue. Since the CDC is obviously part of the Deep State, their numbers are not to be trusted by honest Americans.
It’s the honor system in operation, see, and since Americans are honorable people, they would never falsely represent their vaccination status in order to satisfy their own selfish whims and perverse ideas, not when behaving that way could endanger their fellow Americans, among them the honestly unvaccinated, such as young children and those who are immunocompromised. No, when it comes to weighing the evidence of one’s eyes and belief in the honorability of fellow Americans against the statistical mumbo jumbo disseminated by a cabal of Deep State scientists at the CDC, the scales definitely tilt toward siding with all the American patriots cruising maskless down the aisles of Walmart and Costco. 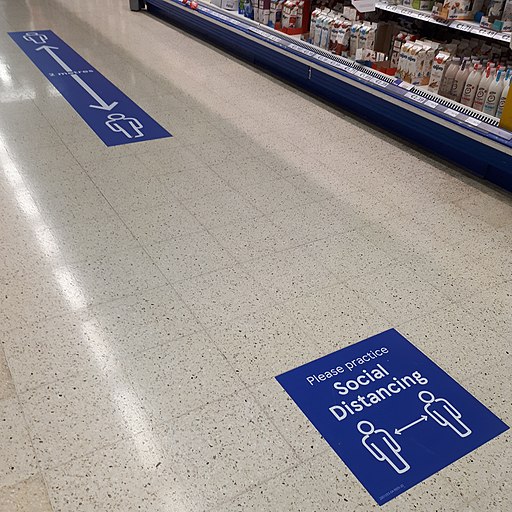 Supermarket social distancing signs in Ireland in August 2020. Follow the blue sign floor tiles! Photo by Ear-phone.
According to the CDC, as of July 25, 2021 the percentage of Americans fully vaccinated against COVID-19 was 49.1 percent. That’s an increase of only about 14 percent since May 13, 2021. Herd immunity won’t be reached until the percentage of fully vaccinated is over 70 percent. Considering how vaccination rates have been slowing, it’s unlikely Americans will achieve herd immunity before the onset of cold weather forces more activities back indoors for the winter.

Judy Garland as Dorothy in the 1939 film, The Wizard of Oz, directed by Victor Fleming. In Kansas, the state Dorothy called home, the COVID-19 vaccination rate is 44.9 percent, 4.2 percentage points below the national average. In a land of alternative facts somewhere over the rainbow, the vaccination rate is much higher – away above the chimney tops, in fact.

Absent widespread vaccine mandates, it could be that a vaccination rate of about 65 percent will be a limit past which we cannot move due to the political and cultural divisions in the country, as honorable American snowflakes dig in their heels like recalcitrant children and refuse to become socialist tools by doing the right thing for others, even passing up bribes from state and local governments. They may kill themselves for the puerile satisfaction of owning the libs, and so be it, but in the meantime they will serve as incubators for new, possibly more dangerous coronavirus variants, and they will spread their affliction to everyone else, even within the magical realm past shop doors.
— Ed.