February 14, 2021 Techly DoRight
Police employees in Beverly Hills, California, have gotten the clever idea that they can effectively jam a live streaming broadcast of their activities by playing copyrighted music from their phones, thereby causing the automated filters of a platform such as Instagram to shut the video down for copyright infringement. The filters have been around for several years, and they can be either too aggressive or too timid unless monitored by a human being, presumably one with common sense. 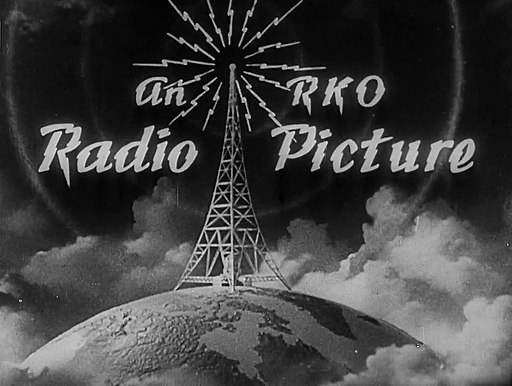 The RKO Radio Pictures transmitter logo that signaled the beginning of a motion picture from that studio from 1929 to 1957. This image is now in the public domain.
But monitoring and moderating by a human being comes after the fact; to shut down a video in real time, the filters have to be automated and act independently. The police employees have figured this out and are now counting on the filters being set too aggressively so that they can exploit the feature for the purpose of frustrating citizens’ rights to film them as they go about their public duties at the behest and expense of the public. This tangled mess will surely end up in the courts.
Meanwhile, at this time like no other before, technology bestows benefits on those who enjoy listening to radio programs from around the world, whether that involves copyrighted music or not. Internet streaming of radio broadcasts has been around for decades, but never has access been as easy for casual listeners or the choices as broad as they are now. Radio Garden is a Dutch non-profit project that makes picking out a radio station anywhere in the world to listen to as easy as spinning the globe and then jabbing a finger at a green dot somewhere on it. Let police employees everywhere know that they are in the public’s domain, and that copyright – as easy as access to copyrighted works may be – is not theirs to wield as a baton.
— Techly