A Twist of Peppermint

December 6, 2020 Vita Historia
When Joey Dee and the Starliters had a hit with the song “Peppermint Twist” early in 1962, they were merely combining the name of a dance craze – the twist – with the name of the Peppermint Lounge in New York City, where they were headliners. The band was notable at the time for being integrated, with three white members and three black members. The lyrics of the song make no mention of peppermint candy, either of white twisted together with other colors or of anything deeper than a repeated entreaty to get out on the dance floor and gyrate, a plea few could resist when hearing the tune, forgetting for the moment the different colors of the bandmates together producing such an irresistible groove.
Peppermint, the flavor, has always been hard for people to resist, especially when it’s used in candies. Most peppermint candies are sold during the holidays at the end of the year, though it’s not clear why people don’t prefer peppermint’s cooling effect more in summer than in winter. Candy canes, with their indelible association with Christmas, are a big reason for the inflated sales of peppermint candies in December. Hot chocolate with peppermint schnapps for the adults is popular, while children will get a candy cane with their hot chocolate instead of schnapps. Other peppermint candies and baked treats abound over Thanksgiving, Christmas, and New Year’s celebrations. 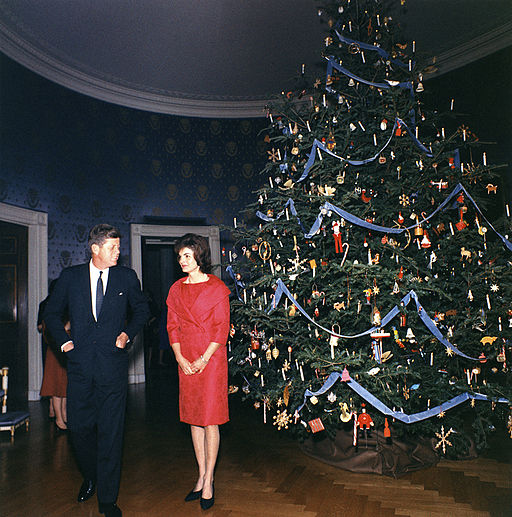 President John F. Kennedy and First Lady Jacqueline Kennedy introduced Christmas Tree themes in 1961 with a “Nutcracker Suite” theme from the ballet by Tchaikovsky. Ornaments included gingerbread cookies, tiny toys and packages, candy canes, and straw ornaments made by disabled or elderly craftspeople throughout the United States. White House photo by Robert Knudsen.
The peppermint plant (Mentha x piperita) contains up to 40% menthol, as opposed to less than one percent found in spearmint (Mentha spicata), and with such a high concentration of menthol there are indications that ancient peoples initially used peppermint medicinally, discovering along the way that of course the addition of sweeteners helped the medicine go down. Since menthol is a proven balm for distressing respiratory and gastrointestinal problems, it makes sense that the most popular incorporation of peppermint oil into sweets would be as a lozenge or hard candy, meant to be sucked over a long time rather than chewed quickly, which would enhance its effectiveness in relieving respiratory or gastrointestinal distress.

Piedmont Candy in Lexington, North Carolina, has been making peppermint candies since 1890, though not candy canes. They don’t use corn syrup, the ingredient which makes candy shiny, hard, and brittle.

All of which may help to explain the popularity of peppermint sweets in winter over summer. Certainly respiratory illness is more common in winter than summer because people are cooped up with each other indoors, where contagion spreads more easily. Gastric problems may be more plentiful over the holidays because of the tendency to overeat then, and to overeat rich foods particularly. A soothing, minty dessert, made with real peppermint oil instead of artificial flavor, may fit the bill in those circumstances the same as popping one of the red and white swirled peppermints, known as starlites, offered in many restaurants at the end of a meal.

Joey Dee and the Starliters perform “Peppermint Twist” on the American Bandstand television program in 1962.
As for the crook in one end of a candy cane, all stories aside about its possible religious significance, it was most probably put there for the purely practical purpose of making it possible to hang candy canes on Christmas trees. The same practicality most likely applies to the red and white twisted colors, along with some secular aesthetics, because they add visual interest to the candy and contrast well against Christmas greenery. Until the 20th century, peppermint candy sticks had been plain white. There is nothing inherently red about peppermint. It’s nice to imagine there may be something more profound about an object such as a candy cane than meets the eye, but really any deeper meaning can be found in eating it, not in looking at it.
— Vita