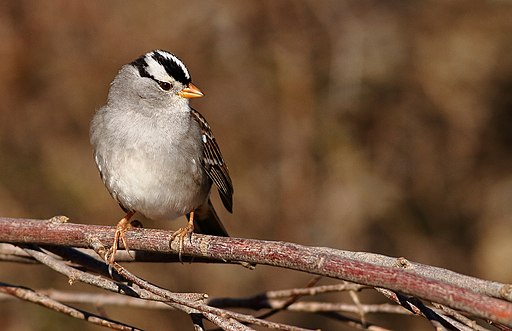 A white-crowned sparrow in Sacramento, California, in January 2017. Photo by ADJ82.
Researchers studying white-crowned sparrows (Zonotrichia leucophrys) in the San Francisco area this past spring during California’s coronavirus shutdown found that the males had changed their song, presumably because it was easier for them to make themselves heard on account of the drop in human-caused noise. The birds no longer had to trill high and loud to pierce through the cacophony. The researchers noted that the calmer, quieter environment allowed the males to use a wider range of sounds in their calls, increasing their chances of mating success since the females find the wider range, with more low frequency notes, more appealing. The white-crowned sparrows in the Bay Area benefited from the reduction in human activity, and there have been similar stories from around the world this past year of animals enjoying a world less in conflict with people.
A video from The Cornell Lab of Ornithology of a male white-crowned sparrow singing.
Eaux Claires is a social activist group in Eau Claire, Wisconsin, that also hosts an annual music festival. This video of the singer, Feist, covering the Yusuf/Cat Stevens song “Trouble”, was filmed on November 1, 2020, as part of the group’s efforts to encourage people – particularly young people – to vote in the November 3rd election.
The political events of the past week in the United States herald a calmer, quieter environment to come, one in which everyone can be heard, not just those who tweet the loudest in ALL CAPS on social media, sowing hatred and tumult. Through the majority of their votes, Americans elected to step back from the brink of authoritarianism. While a disturbing number of their fellow citizens voted their support for climate destruction, white supremacy, and a sneering contempt for the rights of women and minorities, thankfully a greater number turned out to vote in favor of progress down the road of reason and empathy, not continuing on a death march. Those voters, many of them young people voting for the first time, have given all of us another chance to sing a new song.
“Oh Very Young”, a 1974 song by Yusuf/Cat Stevens. The haunting backup vocal was performed by Suzanne Lynch.
Yusuf Islam/Cat Stevens performs “Oh Very Young” in December 2008.
— Izzy