The Breakdown of Consensus

October 11, 2020 Vita Historia
The lack of capacity for critical thinking among some of the American electorate is nothing new. The French traveler Alexis de Tocqueville famously noted it in the late 1830s in the two volumes of his book, Democracy in America. Almost 130 years later, the American historian Richard Hofstadter remarked upon it in two of his works from the early 1960s, Anti-intellectualism in American Life, and The Paranoid Style in American Politics. Both of Hofstadter’s works still apply today in complementary fashion as the 2020 election nears and Clueless Leader and his cult followers on the far right drop in greater and greater numbers off the edge of reality into the realm of psychotic fever dreams. 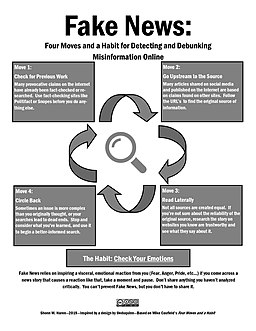 Mike Caulfield’s “Four Moves and a Habit” method for the detection of Fake News online. Infographic created by Shonnmharen.
The great difference between now and the early 1960s, when Hofstadter wrote about the propensity of some people for ignoring facts that didn’t fit their world view, is that those people now have access to the internet and to social media, where they can spread their diseased notions like a contagion. Rumors that once took days or weeks to spread, and in the process may have fizzled out when confronted by facts, now spread in minutes and hours in a continuous onslaught that drowns outs facts. For those too intellectually lazy to engage in critical thinking, there has never been a better time for finding spurious rumors to prop up their dangerously bonkers ideas.
Most of the rumor mongering conspiracy theorists with dangerously bonkers ideas are now, and have always been, on the far right of the American political spectrum. It’s an ongoing feature of American life that the ruling class demonizes the far left because they rightly suspect the far left would overturn the cushy lifestyle of the ruling class if they could, and to help them turn the focus of hatred and suspicion upon the far left the ruling class has always had willing allies, or rather dupes, among the far right. Useful idiots.
These are the kind of people who adhere to QAnon conspiracy theories about the evil character of Democrats and Antifa partly out of credulity since they want to believe the stories, and partly because it titillates them that most reasonable adults, and particularly liberals, are outraged and appalled by the stories. For a third of the American electorate, an incapacity for critical thinking is displayed as a badge of honor, not of shame.

Too many right wing delusionists are willing, even eager, to use violence when they don’t get their way. In this they are aided and abetted by the ruling class, who use them as a cudgel against the far left and anyone else who questions the established capitalist order. Terrorism in this country has almost always come from the far right, not the far left, and for nearly four years now the current president has winked and nodded at right wing terrorists in this country. He has filled a powder keg with dangerous fantasies and then recently lit the fuse with his call out to right wing terrorists ahead of the election.

A sketch from a January 1979 episode of Second City Television, starring Andrea Martin, Catherine O’Hara, and Dave Thomas. In 2016, 52% of white women voted for the Republican presidential candidate, someone who would be incapable of understanding this SCTV sketch as satire.

For Richard Hofstadter in his examination of American history there have been breakdowns in what may be considered the consensus of political views reconciling economic and cultural differences (though he himself chafed at being lumped with the post World War II era “consensus” historians), but only one failure of consensus, and that led to the Civil War. Perhaps hope can be found in the realization that the truly dangerous right wing terrorists in this country are fewer in number than they would have everyone else believe. If the current president somehow gains four more years in power, however, that glimmer of hope may go dark because more violent reactionaries will become ever more emboldened, growing their numbers to become a visceral threat, sinister and close.
— Vita