September 13, 2020 Isidore Gnome
Mycorrhizal fungi are almost entirely underground, with only their fruiting bodies – mushrooms – appearing briefly above ground to sporulate and then disappear. We may think the mushrooms are the most notable part of the Kingdom of Fungi, but that would be like thinking there is little to consider about plants other than their flowers and fruits. It turns out the underground parts of many plants – their roots – could hardly survive without the symbiotic relationship they have developed over 450 million years with the mycelium of mycorrhizal fungi.
The mycelium is made up of numerous filaments called hyphae, and it is the hyphae that interact with plant roots to facilitate the plant’s uptake of water and mineral nutrients, for which in return the hyphae receive sugar and carbohydrates from the plant’s roots. Unlike plants, fungi cannot produce their own food. Mycorrhizal fungi secure food through this mutually beneficial exchange with plants. This has been known for quite some time. But there is something else going on that scientists only recently discovered, something they call the Wood Wide Web. 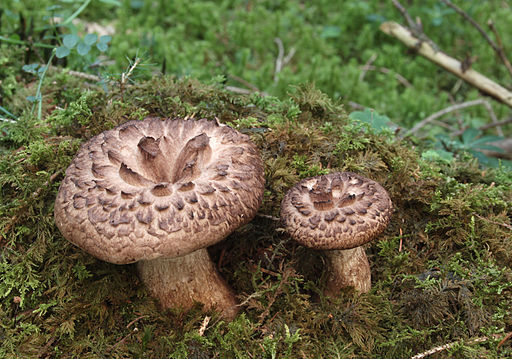 Scaly Hedgehog mushrooms, Sarcodon imbricatus, found in coniferous woods in the district of Eggingen in the city of Ulm in southern Germany. Photo by H. Krisp. 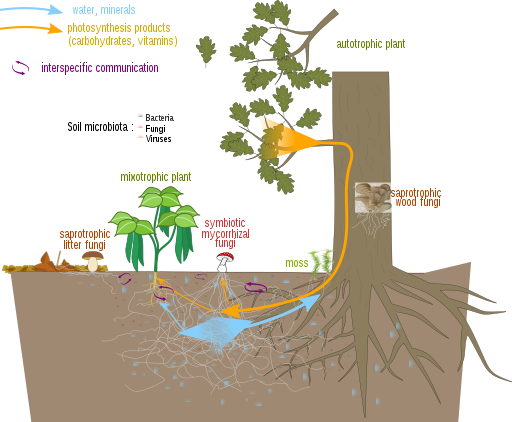 Mycorrhizal fungi are in a symbiotic relationship with autotrophic plants. The relationship is usually mutually beneficial, the fungus providing the plant with water and minerals from the soil and the plant providing the fungus with photosynthesis products. Some fungi are parasitic, however, taking from plants without providing benefits. Conversely, some mixotrophic plants connect with mycorrhizal fungi to obtain photosynthesis products from other plants. Finally, saprotrophic fungi live on dead organic matter without establishing a symbiosis with plants. Illustration and explanation by Charlotte Roy and Salsero35.
An underground network of connected mycelia and roots can span thousands of acres, and through it plants such as trees can send chemical signals to other trees. In effect the trees in a forest can be said to be communicating with each other through their underground social network, facilitated by miles upon miles of mycorrhizal fungi mycelia and hyphae. It is not unlike the system of pipes of varying diameter underlying a city, where some pipes deliver water or water-borne materials, while others carry communications between the inhabitants above ground.
“The Wood Wide Web”, a segment of the PBS NOVA web series Gross Science, produced and presented by Anna Rothschild.

Are the trees sentient? Are mushrooms aware of their part in the bigger picture during their brief look around above ground before they produce spores and collapse back into the fecund earth? Of course not. But assemble all the parts, adding pieces as in a jigsaw puzzle, and it does indeed seem the Earth itself is a living thing called Gaia. This awareness, lost to us for centuries, is now returning dimly, though it was always there for those prepared to observe carefully the natural world, such as how a plant wrenched from its native soil and potted with great attention to its needs still rarely thrived as it would have had it been allowed to stay at home. The newly potted plant receives all it requires in water and mineral nutrients; yet in isolating the plant from its underground social network can it be said, perhaps only fancifully, to be lonely?
— Izzy