June 7, 2020 Editor
No matter how incompetently the current president handles crises, from the toll taken on the nation’s health and economy by the coronavirus to the nationwide protests in response to the police murder of George Floyd, his supporters, followers, and enablers continue giving him a free pass. No evidence makes an impression on them.
The coronavirus is a plot by Democrats to make the current president look bad! No, he makes himself look bad, in the same way that those pants don’t make you look fat – your fat makes you look fat. And the George Floyd protesters need to be dominated in the streets, because that’s what a strong leader does! Never mind that it is the behavior of a tinpot dictator, not the leader of a nation of laws guaranteeing the freedoms of speech and peaceable assembly. 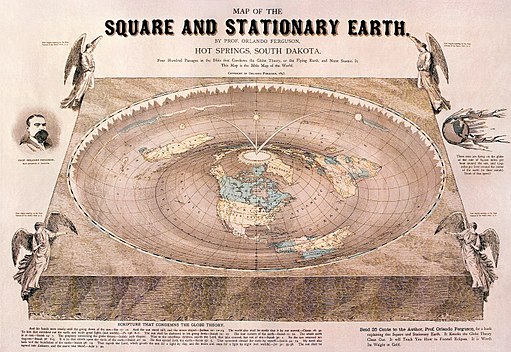 A Flat Earth map drawn in 1893 by Professor Orlando Ferguson of Hot Springs, South Dakota. Looks rather like a roulette wheel. From the collection of the Library of Congress.
There’s the word “peaceable” that reactionaries have hung their hats on for centuries as an excuse to violently quell protests. If only some of the protesters can be goaded into violence by agents provocateurs planted among them by law enforcement agencies or private reactionary groups, then the police employees in riot armor can have license to start swinging their clubs and firing tear gas canisters and rubber bullets into the crowds. In the ensuing confusion, it’s difficult for reporters or other independent investigators to locate and prove the identity of the provocateurs. 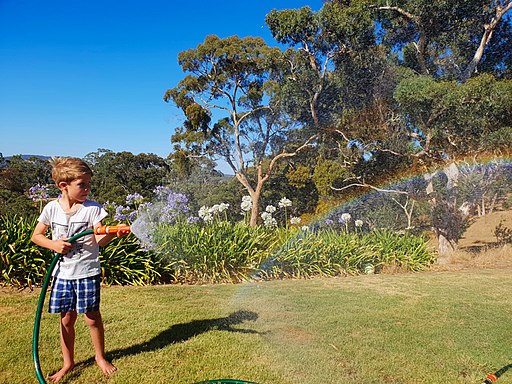 Boy making a rainbow with spray from a garden hose in Charleston, South Australia in January 2019. Photo by Photwik.
Too many people believe, in the end, only what they want to believe, and do not care to trouble themselves any further with truthful details. It’s simpler that way, comforting really. Observational evidence will not convince them to change their minds. To use an example from the natural world, through the years many gardeners and even some professional horticulturists have believed that watering plants in sunshine will scorch the plants’ leaves on account of a supposed magnifying lens effect from water droplets.
Not only has this myth been scientifically disproved, but the evidence there is no validity in it is plain for anyone to see who has watered annual flowering plants tightly packed in a hanging basket or pot. No escaping getting water on the foliage there, and those plants appear to get along alright, and better than they would if the worried gardener had withheld the spray of water waiting for a cloudy day. Yet many continue to believe, because they would rather believe the story their mind and culture invents for them than what the plants themselves are showing. We’re alright! Thanks for the water on a hot, sunny day! Here’s a rainbow for your trouble!
— Ed.