May 10, 2020 Techly DoRight
People fall into comfortable habits and routines through their adult years, depending on their circumstances and how they have adjusted to them. Some people live in partnership with another, while other people mostly live alone. For many people at some advanced point in adulthood it becomes difficult to imagine any other way of living than the one to which they have become accustomed.
A person meets another person, say an older man meets a younger woman, the difference in their ages amounting to 20 years or more, and at first the age gap seems an enormous obstacle to developing a romantic relationship, to falling in love. But once the “falling” begins, the difference in ages doesn’t amount to anything. If it presents any difficulties, they will come later as the relationship deepens. 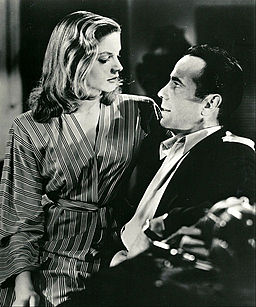 Lauren Bacall and Humphrey Bogart together for the first time in To Have and Have Not.
Scientists and medical doctors have determined the physical symptoms of being in love, the chemicals in the body that produce those feelings, but they will readily admit there is something else at work beyond chemicals, and even beyond psychology. No one knows what causes us to fall in love; it is beyond science and technology to fully understand or manipulate a sensation, a sense of being that goes out from one person to the beloved and returns in kind from the beloved, enveloping both people.

Dr. Helen Fisher, a biological anthropologist at Rutgers University and a leading researcher into why people fall in love, herself married a man 23 years older than herself. She and others involved in the field acknowledge there are special problems encountered in May/December relationships, mostly to do with children, both having them and raising them, though there can also be difficulties in acceptance of the age difference by friends and family.

From the 1997 film As Good as It Gets, directed by James Brooks, Jack Nicholson, 60, has an evening out with Helen Hunt, 34. Willingness to compromise is a sign of respect for another person, and while old habits die hard, there is love in accommodating change for the sake of greater happiness.
All difficulties can be overcome by a couple engaged in a mutually satisfying partnership. Science and technology may be of limited help in some ways that are not as important as they may at first seem, such as having children or in helping the older partner mitigate poor health due to advancing age. When we can’t completely change our circumstances to suit our outlook, it can be better to adapt our outlook to the circumstances, much as we did when first falling in love.
Remember that feeling and bend with it, and maybe just whistle, as Lauren Bacall advised Humphrey Bogart in To Have and Have Not. In real life, the two of them had quite a happy life together after meeting on the set of that 1944 film, until Bogart’s death in 1957. She was 25 years younger than he, and while 13 years together doesn’t seem very long, as they both attested, neither would have skipped the opportunity to be with the other for any reason.
— Techly

“If I knew I was gonna live this long, I’d have taken better care of myself.”
— Mickey Mantle at 46.

Psychology As Good as It Gets, Helen Hunt, Helen Richards, Humphrey Bogart, Jack Nicholson, James Brooks, Lauren Bacall, Mickey Mantle, Rutgers University, To Have and Have Not