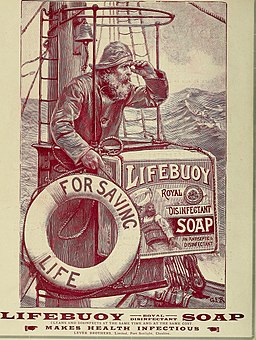 A Lifebuoy Soap advertisement that appeared in a 1902 edition of the periodical Animal Life and the World of Nature: A Magazine of Natural History.
No one with any amount of sense can possibly take seriously the quack nostrums for coronavirus floated by the Snake Oil Salesman-in-Chief at the propaganda rallies and petty grievance sessions otherwise known as his press conferences. And it’s difficult to feel sympathy for those of his cult followers foolish enough to swallow his advice along with his every word, as mean-spirited and spiteful as are the words spewed and the behaviors exhibited by many of them. The ones who deserve our sympathy when they gullibly believe the irresponsible suggestions made by Clueless Leader are the naive, the innocent, and the truly stupid.
Who could have imagined a time when the national leader of this country would behave so irresponsibly that children and the mentally incompetent members of the populace should be shielded from him lest they act upon his remarks and harm themselves, and possibly others. It’s not just his medically unqualified suggestions for attacking the coronavirus that can lead people astray, but things he has said in the past encouraging violence and continues to say to this day. He is a threat to public health and well-being on many fronts.
There is a long history of quacks and snake oil salesmen having their moments of holding a portion of the public within their spell, and that will surely continue because enough people are willing to believe almost anything, and to back up their beliefs with their money. To have such nonsense emanating from the leader of a wealthy, powerful nation, however, is dangerous and disheartening, even sickening. Dr. Oz and Dr. Phil may be morons, and they are certainly capable of giving bad medical advice in the interest of bettering their television audience ratings and swelling their pocketbooks and egos, but neither of them is capable of swaying a significant minority of the populace to hit the streets in an armed insurrection, or to swallow or inject poisons. That kind of influence has always been exercised by cult leaders, and not by mere quacks or by responsible national leaders.
— Vita