April 12, 2020 Isidore Gnome
“Oats. n.s. [aten, Saxon.] A grain, which in England is generally given to horses, but in Scotland supports the people.”
— from A Dictionary of the English Language by Samuel Johnson.

The detrimental effect on the dairy industry of lockdowns state governments have instituted in reaction to the coronavirus could have long term consequences, tipping the balance abruptly toward greater production of plant derived milks, butters, and cheeses. Traditional dairy has been losing market share to plant derived dairy for decades, with losses getting larger especially in the past decade. Now loss of revenue due to coronavirus lockdowns of schools and restaurants could mean bankruptcy for many dairy farms and a long term shift toward lower production as traditional dairy transforms into a lesser role.

There will no doubt always be demand for traditional dairy products, but if supermarket shelf space is an indicator of what consumers want, then plant derived milks have taken the largest chunk of shelf space away from traditional dairy, while butters, and particularly cheeses have been less competitive. The consumption of animal milk products has always been a peculiarly human practice. The desire for milk and associated products is so great that people will go to great lengths to produce and consume ersatz milk derived from nuts and grains. It is beyond the scope of this article to investigate why that is; it is enough merely to point out that consumption of milk fulfills for many people a deep-seated need, a need met for all other mammals in infancy, and then forgotten. 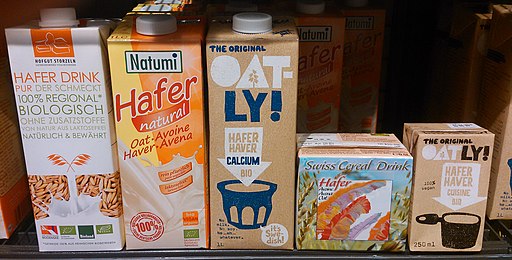 Different brands of oat milk available in a German organic supermarket in September 2015. Photo by Fretdf.
“Milk. n.s. [meelc, Saxon; melck, Dutch.]
1. The liquor with which animals feed their young from the breast.
2. Emulsion made by contusion of seeds.”
— from A Dictionary of the English Language by Samuel Johnson.
It follows then that animal milk production for human consumption is an artificial activity, consequently involving some pain and suffering by the animals, both mothers and their artificially weaned young. We have done these things for so long, for centuries going back ten thousand years or more to the beginning of agriculture, that we think the activities are natural. They are not. The closest parallel in the rest of the animal kingdom can be seen with how ants tend to aphids in order to secure for themselves the aphids’ honeydew secretions. Those secretions are not intended for consumption by the aphids’ young, however, but are merely a byproduct of their ingestion of plant juices. The relationship is closer – but not entirely the same – as our relationship to honey bees than it is to our relationship with dairy animals. The relationship we have with dairy animals is mere exploitation, closer to that of vampire bats with their prey, or to bloodsucking insects with their victims, or even to a virus with its host.
— Izzy