All Lines Are Busy

April 5, 2020 Techly DoRight
Filing an unemployment claim online is the modern way, and few people bother about calling to file their claim. At least they don’t bother until they reach the last step of filing online when they may be confronted by a request from the unemployment office to call them in order to answer some questions for clarification of their claim. By the way, the claim is not complete and official until the applicant makes that call. *CLICK* 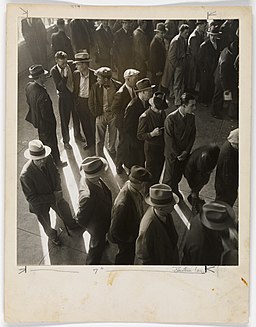 Jobless men lined up for the first time in California in 1936 to file claims for unemployment compensation under the Social Security Act of 1935. Photo for the Social Security Administration by Dorothea Lange (1895-1965).
Making that call and actually getting through to a live human presents a nearly insurmountable obstacle when tens of thousands of other applicants are trying to do the same thing at the same time, overwhelming a system that was meant to handle only hundreds of calls each day, or maybe a few thousand calls a day at best. Since Department of Labor guidelines for unemployment claims dictate that many, possibly most, applications require follow up questions for clarification, there are now hundreds of thousands, maybe millions, of unemployment applicants around the country whose claims have been in limbo for weeks because they cannot get through on the phone to their state’s unemployment agency, at the agency’s request. “We’re sorry we can’t take your call at this time, as all operators are currently busy assisting other applicants. Please try again later.” *CLICK*
In the 1979 PBS television show Previn and the Pittsburgh, Miklós Rózsa conducts a suite from his score for the 1959 film Ben-Hur, performed here by the Pittsburgh Symphony Orchestra. If you’re going to be on hold with a phone call, you might as well listen to some glorious music, and particularly at this time of year if it’s related to Easter.
No one knows exactly how many people are trying to call and not getting through. The online claims are in limbo, and so how would anybody know? The current estimate of approximately 10 million new unemployment claims nationwide is almost certainly a low ball figure. The technology exists for handling such a high volume of online claims and the phone calls they generate, but state governments didn’t want to spend the money for technology and employees that would have been underused most of the time. State officials would have had difficulty selling preparation for the absolute worst case scenario. “The party you have reached is not taking any more calls.” *CLICK*

Rózsa’s “Overture” to Ben-Hur, recorded in 2017 using state of the art technology. For all that, music like this is performed by musicians on instruments that have changed little for centuries. Note the fellow filming the proceedings on a digital video camera no bigger than a tablet computer, which nonetheless delivers excellent optical quality and smooth motion. If you’re stuck at home for days and weeks at a time, it’s nice to have technology like this available as a compensation.

They could have come along part of the way, however, mainly in improving their ability to scale up quickly in response to a crisis. Instead, in some states like Florida, led by Republicans, officials actively undermined the capabilities of agencies, like unemployment offices, which were meant to aid workers. In times of low unemployment the agencies adequately supported the needs of claimants, but as soon as the load increased the system buckled and the agencies’ inadequacies became apparent. “Your call is very important to us. Please stay on the line to speak to the next available representative.” *CLICK*

Like the infectious disease advisory boards and the equipment and facilities necessary for coping with a pandemic, the state unemployment agencies appeared in quieter, safer times to be unnecessary expenses in the view of the kleptocrats currently occupying public office throughout much of the land. But wiser heads understand these are services that, when you need them, you really need them. Dumbkopfs don’t understand and are unwilling to admit these services can’t be brought up to speed overnight to handle a crisis the magnitude of the coronavirus pandemic. Primarily they don’t care. Trumpkins do understand military defense preparedness, but then that has more to do with maintaining the gravy train of defense contract boondoggles than with the actual requirements for defending our country. They think defending our country means ripping children away from their parents at our southern border and throwing the parents and children into separate concentration camps. Trillions for defense, but no more than pennies for scientific and humanitarian concerns. “All lines are busy. Good-bye.” *CLICK*
— Techly

Finally, an analysis of Rózsa’s “Prelude” to Ben-Hur, the music that played during the opening credits. To all those who must sit and wait while technology catches up, may your call finally get through.
Easter "Overture" to Ben-Hur, "Prelude" to Ben-Hur, André Previn, Ben-Hur, California, Coronavirus, Department of Labor, Dorothea Lange, Dumbkopfs, Florida, Kleptocrats, Miklós Rózsa, Pittsburgh Symphony Orchestra, Previn and the Pittsburgh, Public Broadcasting Service (PBS), Republicans, Social Security Act of 1935, Social Security Administration, State Unemployment Offices, Trumpkins, Unemployment