March 22, 2020 Editor
Like everything else in our culture, food has gender associations. Steak is masculine, and salad is feminine. That’s a gross generalization, of course, but one that is valid enough for advertisers and marketers to recognize and exploit. The television commercials for Arby’s restaurants are an obvious example, wherein a narrator announces in his sonorous baritone that Arby’s has “the meats.” It’s not easy to imagine a female narrator making the same pronouncement.

Marketing campaigns and the tactics advertisers deploy in them are a window into a culture’s true underlying motivations, into its id, because advertisers understand the greater value for them and their clients of appealing to emotion over reason. They don’t create cultural stereotypes; they only exploit them. What follows is a short list, by no means comprehensive, of the preferred foods of men and women as advertisers see them. 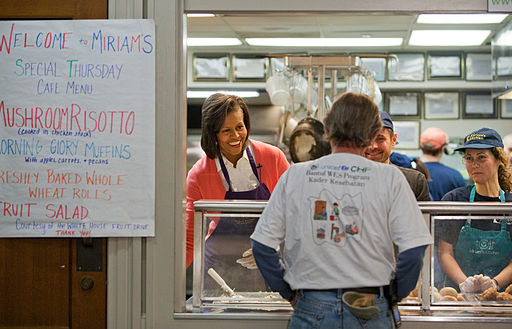 Michelle Obama serving food on March 5, 2009 at Miriam’s Kitchen, a local non-profit organization that provides healthy, nutritious meals to the homeless in Washington, D.C.. White House photo by Joyce Boghosian.
For women – salads, cupcakes, chocolate, wine, baked chicken, vegetarian lasagna, quiche, souffle, casseroles, soups, cottage cheese.
What a lot of nonsense! It would be easy to blame advertisers for gender prejudices toward food if it weren’t for the reality that they only exploit and reinforce the prejudices already held by their target audiences. Having enough quality food to eat should be the first priority for people of any gender. Of the two stereotyped cuisines, however, the one supposedly preferred by men is overall unhealthier for the eaters and for the planet. Maybe leave the testosterone aside and make room on the plate for mushroom risotto, fruit salad, and an effort to help make the world a better place.
— Ed.