March 15, 2020 Isidore Gnome
“‘Well, I must endure the presence of two or three caterpillars if I wish to become acquainted with the butterflies.'”
— said by the flower in The Little Prince, by Antoine de Saint-Exupéry.

This year it’s finally time to turn as much as you can of your lawn over to flowers. Go ahead and do it. If a homeowners’ association stands in the way, perhaps it’s time to reconsider being a member of such an uptight organization. Where zoning ordinances favor grassy lawns over flowers tall and short, crawling and upright, push to the limit and grow flowers right up to the curb. Your neighbors may grumble about your yard’s new look, or they may be pleased. You’ll never know unless you grow it the way you want. 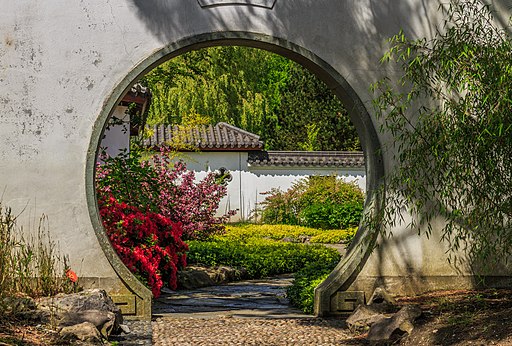 The Moon Gate of the Chinese garden, in the Hidden Realm of Ming within Hortus Haren, one of the oldest botanical gardens in The Netherlands. Photo by Dominicus Johannes Bergsma. Not a blade of grass in sight!
If you live in the countryside, you may already be familiar with the joy of minimal mowing and maximal flowering plants because neighbors and public officials are less likely to impose on you their views of how you should care for your land. In the cities and suburbs the situation is different, as is well known by too many people forced to spend too much of their time with lawn mowers and weed whackers. Push back! Where there had been 75 percent lawn and 25 percent flower bed, flip that this year and blanket over half the yard in flowers.
Plant densely with flowers so that weeds have a difficult time taking over. Use walkways, stone edges, benches and other features to define the space so that it doesn’t appear to your neighbors and public officials to be an undifferentiated meadow which will spew weed seeds onto the rest of the neighborhood. Busy bodies have an easier time accepting flower borders than meadows. It’s just that your yard will be mostly flower borders, and very little lawn, maybe none if you can arrange it and it suits you. Go ahead and do it. Surround yourself this year in floriferousness.
— Izzy