It Hurts All the Same

March 1, 2020 Vita Historia
It’s no surprise MAGA Mussolini has called the imminent danger of a coronavirus pandemic a hoax, nor is it a surprise his MAGA followers swallowed that lie and called for more. They always do. These developments have become so predictable that they no longer warrant the bother of linking to the news stories about them. All the rest of us can do, those of us who live in the fact-based world, that is, is resist the implementation of damaging policies by those who live in the fantasy world of MAGA hate-based politics. 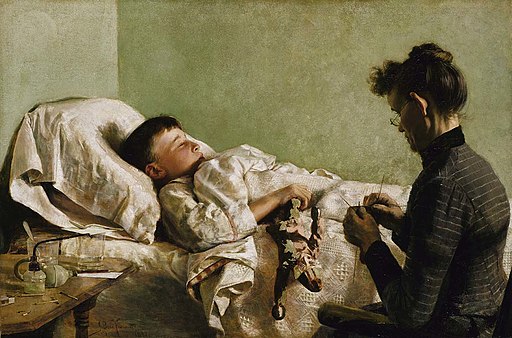 The Sick Child, an 1893 painting by the American artist J. Bond Francisco (1863-1931).
The great surprise is how well scientists and doctors have done in the past 100 years in restricting another pandemic like the Spanish Flu outbreak of 1918 and 1919, which killed 100 million people around the world. The Spanish Flu came on the heels of the close of World War I, and after it had finally flamed out it had claimed more lives than that most horrific “War to End All Wars”. That was the way the balance had worked throughout history, with battlefield deaths generally being outpaced by the communicable diseases unleashed in the gatherings of large armies and refugees. The later twentieth century holds the dubious distinction of tipping that balance toward human mayhem as the major cause of death in wars.
What is most remarkable about the efficiency of modern science in preventing the kind of communicable disease pandemics which have periodically scourged humanity is that scientists and doctors have done this despite the huge increase in population at the same time worldwide travel has skyrocketed in volume and speed. More people than ever before are moving faster and more frequently from one part of the world to the next, and all the while they are sharing untold numbers of germs both dangerous and mundane with local populations.

In the taking over of the New World by European colonists only two and more centuries ago, those sorts of introductions – though at a slower pace – led to genocidal destruction of the indigenous population through their exposure to an array of unfamiliar diseases. People more often lived in lighter concentrations then than they do now. Travel was certainly far slower, and most people then lived their entire lives in the familiar surroundings of one city or of a handful of farm villages.

The great danger now is the introduction of an unfamiliar permutation of a familiar virus or bacterium. And yet for 100 years the world’s scientific and medical professionals have forestalled the disaster that could easily overtake us if they weren’t vigilant. Calling their sincere efforts a hoax helps no one, and acting on such misinformation would amount to carelessly flipping a lit cigarette butt onto dry brush.
— Vita