February 9, 2020 Techly DoRight
When the nineteenth century German-Austrian cabinet maker Michael Thonet (pronounced Toe-net) turned his attention to making furniture using bentwood, he perhaps had no inkling his technique for producing strength through elegant design would not be surpassed by other manufacturers in the ensuing century and a half. Some have made chairs just as strong, and others have created furniture attractive in the eyes of many beholders, but none have combined the two features as well as Herr Thonet did with his café chairs and other pieces. The furniture making business he established with his four sons in the mid-nineteenth century is still in production today.
The strength of seating matters more than ever presently because of the increasing amount of people who are overweight or obese. Bariatrics is a medical term related to the ramifications of obesity, from preventing it to curing it to all the methods and practices in between for treating the condition and coping with it. Adults under 200 pounds probably pay little attention to a listed weight capacity for a chair, sure as they are in the knowledge that any reputable furniture maker will engineer their chairs to uphold them securely. Adults over 200 pounds do not have similar confidence. 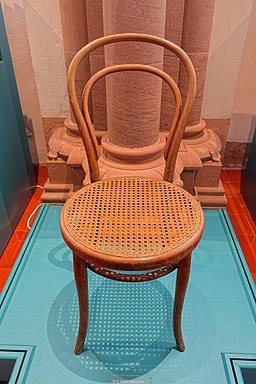 The original 1859 design of Chair No. 14 by Thonet did not have braces between the seat and back, which they incorporated into the design in later years. This particular model is in a museum in Nuremberg, Germany. Photo by Daderot.
There are no government regulations requiring furniture manufacturers to list weight capacity on their products for one thing, and for another, when a manufacturer does voluntarily list a weight capacity, they often do not specify whether it is for a static or dynamic load. Almost universally, the listed capacity is for a static load. A static load limit does not account for the uneven distribution of weight as a person shifts about in a chair, or when the person gets in or out of the chair. The seat may be listed for 250 pounds, but what happens when a sitting 225 pound person braces himself or herself against one arm of the chair in order to stand up? Now the arm and one side of the chair are under an extraordinary strain they may not be built to withstand. 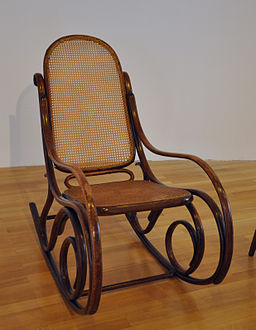 Thonet Rocker No. 17, from 1870, in a museum in Frankfurt, Germany. Photo by Wikimedia user FA2010. The bentwood rocker has been a mainstay since Thonet introduced it in 1860, however since it has always been a piece more for private residences than the No. 14 chair, it has not been subject to the same standards of commercial use in a variety of settings, and therefore there are many more cheaply made knockoffs that are not as sturdy as the original. Buyer beware!
Overweight people and people with limited mobility often need to brace themselves in some manner when getting in and out of chairs. The weakness of some cheaply made chairs these days becomes apparent under these shifting load conditions. A 250 pound person may be perfectly safe and comfortable seated in a chair listed for 250 pounds, as long as he or she doesn’t move erratically. Even a chair listed at 300 pounds may in that event have its flaws exposed. Flaws such as weak wood joined inadequately in the structure, and all that flimsy construction hidden by overstuffed upholstery.
The beauty of furniture made by Thonet and other similar manufacturers lies not only in the graceful curves of their bentwood structure, but in the strength inherent in those curves of superior pieces of wood and in the simplicity and effectiveness of their joinery. It is difficult to imagine the manufacturers of highly padded living room recliners using the same pine sapwood for structure, and brads – brads, of all things! – for cheap, rapid joinery, if their handiwork were open for all to see the same as it is with a Thonet Number 14 café chair, a timeless design that continues to sell.

There have been other factors figuring into the enduring popularity of the No. 14, such as how its simplicity lent itself to mass production, lowering costs, and how the paucity of joints, which were strong yet simple, allowed buyers to assemble the chair themselves, saving space and freight costs since the Thonet company could ship the chairs flat, as a set of constituent parts. Perhaps the largest factor in the success of the No. 14, as well as similarly designed and constructed bentwood pieces of furniture, was that even in the days before independent bodies tested chairs for strength and durability, buyers knew these pieces were stronger than they appeared, a vital consideration for shop owners serving customers who could tip the scales anywhere from 40 to 400 pounds.
— Techly