Sleep, Pretty Darling, Do Not Cry

December 15, 2019 Isidore Gnome
“Golden Slumbers”, a song fragment that is part of the medley making up most of side two of the Beatles’ 1969 album Abbey Road, leads straight into “Carry That Weight”, followed by “The End”. The song fragment is credited to Lennon/McCartney, but really it was entirely Paul McCartney’s composition, for which he borrowed lyrics from “Cradle Song”, a 1603 lullaby written by Thomas Dekker. The wonderful orchestration on this recording was by George Martin, the Beatles’ long-time producer.
The lives of dogs and cats, or just about any animal we keep as a pet, are so much shorter than our own that anyone who has had an animal companion has certainly experienced the passing of one, possibly several, within the span of his or her own lifetime. It is never easy, whether death comes for a pet as the outcome of a quick accident or of a prolonged illness.
Grief only comes from having had an emotional bond with someone, and people have emotional bonds with their pets, otherwise there would be no pets, only creatures regarded by us with a certain distance and detachment. Guilt is part of the bargaining stage of grief, and it can be strong in people grieving the loss of a pet because they bear such a great responsibility for the pet’s well being and, sometimes, how the pet’s life ends. 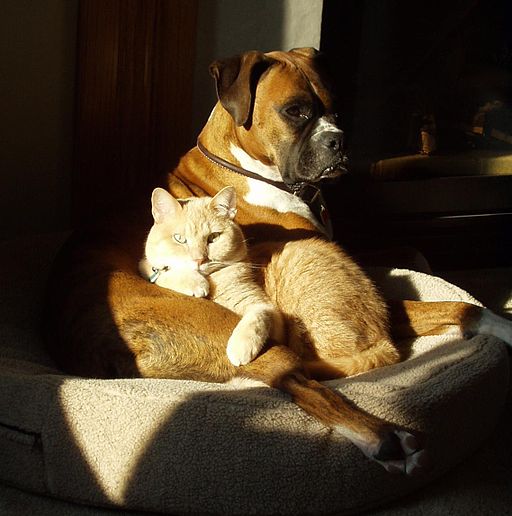 A light brindle boxer dog peacefully coexisting with a ginger cat. Photo by Rufus Sarsaparilla.
Even when, nearing death, the light seems to have gone out of a companion animal’s eyes, there is still a glimmer of that shared bond in the way they look at us as a friend and protector. What is happening to me, and why are you, always the powerful person in my life, helpless to make things better? There is no reproach in that look, only sadness, pain, and bewilderment. Ultimately, before the light in a dying pet’s eyes goes out entirely, there is a look of surrender and then acceptance. Relief and blessed peace follows for everyone.
It’s far too soon to contemplate taking on the responsibility for another animal’s life, much as there is never a shortage of them who need a home with a caring person. Why would anyone want to be assured of going through all that emotional pain again, five, ten, or fifteen years down the road? But the animals will die regardless of their situation, either alone as a stray or in near anonymity in a cage as one of many animals in a shelter. They can live better with someone who cares deeply, and they will give as well as they receive.
That’s all in the future, possibly, after a period of bereavement for this one pet, because after all they are not interchangeable parts, but individuals with personalities. For now, there are only sad hours, and tears, and prayers for a peaceful end to suffering.
— Izzy