Where the Sun Don’t Shine

December 1, 2019 Vita Historia
Tongues are wagging and fingers are busy typing all around the country about the Instagram influencer topic of “perineum sunning”. Or did the topic gain traction on Instagram from a post by a micro-influencer? Or even less popular than that? Wherever she was a week or two ago in the Instagram influencer pecking order, surely by now she is on her way to becoming a mega-influencer, if there is such a ranking.

The perineum is the part of the human body between the genitals and the anus, and according to Metaphysical Meagan, the influencer everyone is now talking and writing about, it feels good and is good for her – and possibly for you, too – to expose that area to direct sunlight for as little as less than a minute each day. Judging from pictures posted online by M. Meagan and others, the preferred method of achieving the proper exposure is lying naked on one’s back and splaying one’s legs in the air. The pictures of people baring their nether parts to the sun are hilarious. 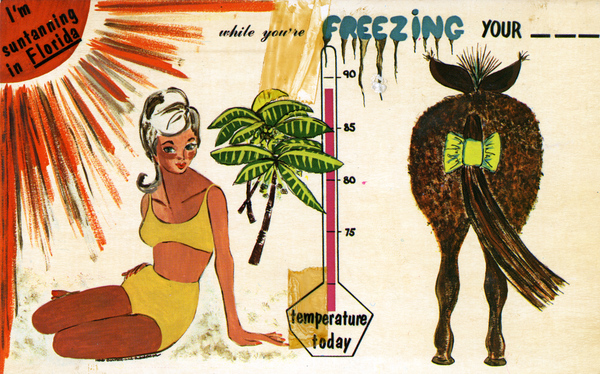 A Miami Beach, Florida postcard from February 1967, in the Postcard Collection of the State Library and Archives of Florida.
As stupid trends go, this is relatively harmless, like mood rings or pet rocks. A few people will get rich off it, some others will buy into it and wonder why they did years later, and most will shake their heads and chuckle about it. In any event, the trend will pass soon, knocked off the radar by the next supposed big thing. The adherents of perineum sunning promote it’s dubious health benefits, and it is doubtful their claim will lead to great harm for Instagram devotees who follow prescribed practice and expose their perinea to the sun for less than a minute a day. Why talk or write about it then, and give this silliness more free publicity? Because of what this kind of ultimate silliness says about us and how we arrived at this moment.
First of all, the relatively recent phenomenon of the fascination with a suntanned physique as a sign of health and wealth is an attribute of white people generally, and of some white people with too much time and money on their hands particularly. Until the 1920s, a suntan was the mark of working class people who toiled outdoors all day for little pay, and the upper classes therefore scorned suntans and suntanned people. That flipped in the 1920s and ’30s, in some cases for worthwhile health reasons, such as the recognition that rickets was caused by a lack of vitamin D, a vitamin the skin produces upon exposure to sunlight. Other reasons had to do with displaying one’s wealth and the leisure time to be able to travel to far off, exotic locales and lie around in luxurious idleness soaking up the sun’s rays. Suddenly having a healthy glow from a tan was the in thing among the upper crust, and being pasty white was for the lower orders or the sick.

Now white folks with too much time and too much money are doffing all their clothes, lying back and flinging their legs in the air to get a warm, toasty feeling down where the sun don’t normally shine, and some of them are taking pictures of their frivolity and writing about it and distributing the goings-on to followers who eagerly soak it all in like the rays of the sun, for good or ill. Well, more power to them. It beats working for a living.
— Vita