November 24, 2019 Editor
12 Then Jesus said to his host, “When you give a luncheon or dinner, do not invite your friends, your brothers or sisters, your relatives, or your rich neighbors; if you do, they may invite you back and so you will be repaid. 13 But when you give a banquet, invite the poor, the crippled, the lame, the blind, 14 and you will be blessed. Although they cannot repay you, you will be repaid at the resurrection of the righteous.”
— Luke 14:12-14, from the New International Version of the Bible.

It’s puzzling to watch poor and working class people watch rich people on television, such as on shows about house hunters looking at multi-million dollar properties. Many of these rich people are frivolous twits who obsess about things like granite countertops and bathroom saunas. Why don’t many of the poor folks watching these excesses feel anger and revulsion at money being thrown away on luxuries, things they themselves could never afford as they struggle to make ends meet from paycheck to paycheck? Instead they watch these programs with a kind of detached envy, commenting critically on the relative niceness of various unnecessary features.

As for the rich, they mostly have contempt for the poor people window watching on their lifestyles. They usually try to mask their contempt, of course, since it’s considered bad form among their peers to make a show of kicking the downtrodden. Mostly they ignore the poor, which is easy to do living in gated communities and surrounding oneself with all the accoutrements of wealth and security they can buy. It doesn’t occur to them to question the envy of their lifestyles by the poor, since it is based on the fabulous nature of material things they themselves exalt above all else. What troubles them is the contempt wafting toward them from some in the middle class. 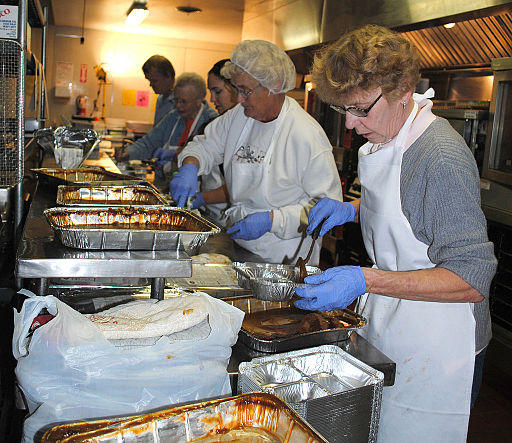 Nancy Wilson, foreground, Meals on Wheels program manager, works along with other volunteers at the Great Falls Community Food Bank in Great Falls, Montana, preparing gravy on November 23, 2011 to be used the next day for the Thanksgiving meal. U.S. Air Force photo by Airman 1st Class Katrina Heikkinen.
Historically, it has always been elements from the middle class which have led revolutions. The poor are too wrapped up in trying to survive and in slavish envy of those who have more, even when wealth is waved in their faces, but always out of reach. The middle class have the education to understand how the rich are playing them for suckers, and they have the leisure time to organize against them. They have only to inform the poor how the rich have used and manipulated them in order to gain strength from numbers. That’s easier said than done, however, and it’s a task made more difficult by the popularity among the poor of Lifestyles of the Rich and Famous type entertainment in movies and television. 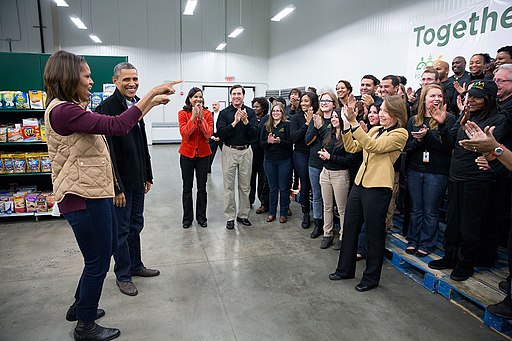 President Barack Obama and First Lady Michelle Obama greet staff and volunteers prior to a Thanksgiving service project at the Capital Area Food Bank in Washington, D.C., on November 27, 2013. Official White House photo by Pete Souza.
This Thanksgiving and throughout the year, it is unlikely a high percentage of the rich and famous will be helping feed the poor and homeless. Giving and volunteering are largely activities engaged in by the middle class, and even the poor and working class. Strange then that the poor and working class should continue to ally themselves with the rich, to envy them their wealth and privilege and, when they vote, to often as not vote to the rich person’s tune.
It tries one’s patience and understanding to refrain from feeling contempt for a group of people who can witness the casual disregard of a leader who tosses rolls of paper towels at them after a horrific natural disaster, and who nevertheless still support that leader. Such a leader would never volunteer to feed the poor at a food bank or homeless shelter, at least not sincerely. For him, it would be nothing more than a photo opportunity he would be eager to get over with. But a division between the middle class and the working class and poor only benefits the rich, the oligarchy. Better to reach out and to serve, even when the people on the other end can often be ignorant, mean-spirited, and hateful.
— Ed.