A Pruning Guide for the Squeamish

November 21, 2019 Isidore Gnome
Pruning trees and shrubs correctly is not as difficult as some careful people may think, though pruning incorrectly is as easy as some careless people make it look. First, leave those shears in the shed. Shears are effective at cutting back herbaceous perennials and ornamental grasses, but are otherwise detrimental to the health of woody plants because they leave behind stubs. Don’t leave stubs!

Stubs are what is left of a woody twig or branch after the person pruning it has failed to cut it off at the proper place, which is close to a node where it joins the main plant, and instead has cut it haphazardly somewhere along its length. Shears by definition make cuts haphazardly on woody plants, even if at a distance the poor shrub looks neatly trimmed in shapes that some people find pleasing. Who hasn’t looked at a shrub minding its own business and thought, “That bush would be much more attractive shaped like a cube”? After several swipes of the shears, the bush appears neatly cubed from a distance, but upon closer inspection it will be evident it has suffered numerous wounds it will have trouble healing, if it can do so at all. Don’t leave stubs! 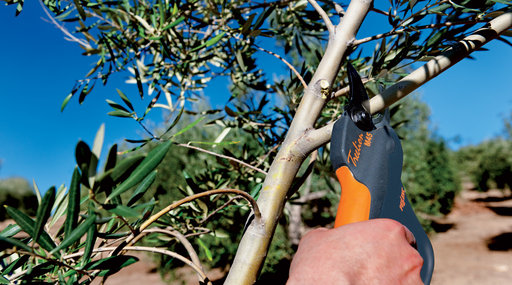 Hand pruners – or secateurs – in use. Photo by Pellencgroup. The cut being made in the photo is too far out along the branch to be a proper pruning cut. It could be a preliminary cut intended to take away most of the weight of the branch to reduce the possibility of bark tearing away from the trunk when the branch falls loose. In that case, the final pruning cut should be close to – but not flush with – the trunk, as shown with the cut a bit higher on the trunk.
There are three principle reasons for pruning trees and shrubs, in descending order of importance.
Timing can be another critical aspect of pruning, and it can be confusing in light of differing requirements from plant to plant, with some requirements relevant to plant health and others to aesthetics, as in promoting or preserving flowering. In areas of the country with winter freezes, however, there is one general rule applicable to avoiding injury or weakening of a woody plant, and that is to refrain from any major pruning in the weeks leading up to the first frost in late summer and early autumn. The reason is that pruning encourages new growth, and tender new growth is susceptible to cold injury. The results are not apt to be catastrophic for the plant, but it will have wasted valuable energy on damaged top growth at a time of year when it would be healthier for it to be storing energy in its roots. It’s like shaking a person who wants to go to sleep.

Later in the year, in winter and especially in late winter, it is alright to perform major pruning on many woody plants because they are dormant. The plant’s hormones will not awaken it to push out new growth at that inopportune time. The exception is a sappy plant such as a maple tree. As anyone knows who has ever tapped a sugar maple tree for maple syrup, a maple produces sap copiously in late winter and early spring, and drawing too much of it at one time, as occurs in cutting off a major limb, will weaken the tree. It’s better to leave pruning of sappy plants until summer, when they will only dribble, and not gush, from wounds.

These are all great bits from a first series episode of Monty Python’s Flying Circus, but the portion relevant to this post begins at the 9:46 mark of the video.
If it seems this language of pruning is evocative of surgery on humans and other animals, the good reason for it is that the two procedures are more alike than different in their effects, and it is helpful to be aware when pruning that you are making cuts into a living organism. Too many people with shears, particularly the mechanical kind, appear to proceed blithely without any awareness that their hedges and foundation plantings are composed of living organisms that must expend energy recovering from an assault with carelessly wielded cutting implements.

As for appearance, while there are few people who can carry off the page boy haircut look successfully, there are for some bewildering reason an awful lot of people who think the plant equivalent of that haircut looks just dandy on their shrubs. If the shrubs themselves could speak, they might express a preference to be left alone to allow their natural beauty to shine through, with only an occasional light touch from a deft hand to help them look their best. Most of all, to keep trees and shrubs beauteous and robust, don’t leave stubs!
— Izzy