November 17, 2019 Techly DoRight
The first rule of traveling with cats is: Don’t! at least not if you can avoid it. Unlike dogs, many of whom are not averse to travel as long as they are close to their human companion, cats in general do not like the experience no matter what. Before the traveling even begins, cats will balk at what they sense is an impending change in their routine and surroundings. For spayed and neutered cats who are well fed at home, there is no need to go on an adventure far from home, and there is limited appeal to wandering for the sake of wandering. 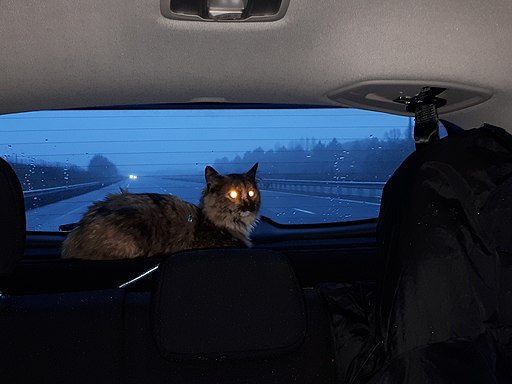 The photographer’s cat rides next to the rear window in a car. Photo by Tangopaso. Even an extraordinarily calm cat should ride in a carrier of some kind within a moving vehicle.
The good news for those who must disturb their feline companions by taking them on a trip of any length is that in the past 20 years veterinary science and technology have conjured ways of calming cats without resorting to drugs. For hard cases, people can consult a veterinarian, who may advise them on administering over the counter antihistamines, but always with great care and starting with the minimum possible dosage. Antihistamines have a slight sedative effect on us, which is why the instructions warn against operating machinery, but a slight sedative effect on humans does not necessarily translate to a similar effect on cats when accounting for the difference in weight between humans and cats because there are differences in physiology as well.
For most cats at most times it is sufficient to use one of the many pheromone sprays, diffusers, or collars on the market, or some combination of them. There are also safe food treats that may have a calming effect, though results from cat to cat are highly variable. The pheromones and the treats are far safer than drugs, and experimenting with varying amounts and combinations is unlikely to result in unfortunate, unintended consequences for cats. There are also flower and herb remedies available, though people should make certain the labels explicitly state they are safe for cats. Citrus oils and essential oils, for instance, are poisonous to cats. Just because a product is advertised as “all natural” does not guarantee its safety for all creatures in all circumstances. A cat in nature would most likely have the good sense to avoid what is not healthy for it, and understand that “all natural” is merely a dubious marketing gimmick, not a guarantor of safety, and certainly not of efficacy.
An overlooked consideration in traveling with cats is how calmness or lack of it flows back and forth between cats and people. A calm cat can calm a person, and vice versa, though its most effective to solve the problem from the cat’s perspective. A human practicing Zen meditation while mindfully driving a motor vehicle will probably not go far toward calming a yowling, distressed cat riding in a carrier inside the same vehicle. A calm cat, on the other hand, can have a great effect toward reducing the stress of people sharing the vehicle on a road trip. First give that cat some things and some reasons to feel peacefully at ease, and then you can more easily feel peaceful and calm yourself as you tootle on down the road. Purr more, hiss less.
— Techly