The First Continental Congress of the American Colonies sent a petition to King George III on October 25, 1774, requesting he redress their grievances against the British Parliament related to the Coercive Acts passed in response to the Boston Tea Party of December 16, 1773. The king ignored the petition, and consequently the colonists’ march toward revolution picked up momentum over the next year, resulting in the beginning of hostilities in the spring of 1775. Petitions were the primary recourse of the American Colonists in dealing with their British rulers across the Atlantic Ocean since they had no official representation in Parliament, hence the slogan “No taxation without representation.”

The nation’s founders regarded the right to petition the government as so essential to a free society that they included it in the First Amendment, adopted in 1791. They made the right explicit despite the reality that citizens of the United States, unlike colonists under the British Empire, had official representation in the government. James Madison, who was largely responsible for drafting the Bill of Rights, understood that while the people had representation in government, their representatives may not be responsive to the wishes of all the people, and that therefore the people required another, independent outlet “for a redress of grievances.”


The unresponsiveness of government representatives to the people has rarely appeared as evident as it does now, when it seems representatives are responsive mostly to the wishes of corporate contributors to their election campaigns. Polls do not necessarily give lawmakers an accurate idea of how some of their constituents are feeling about issues because responding to pollsters is a passive response to a pollster’s sometimes tailored questions. Poll sample sizes are also often ludicrously small on account of the expense and difficulty of polling. Pollsters claim they conduct their surveys based on well-researched principles in order to achieve accurate representation from small sample sizes, but there are plenty of examples to cite in demonstrating that taking polls is as much art as it is science, and not at all infallible. For one example, look at how inaccurate the polling was in several key Rust Belt states in the weeks before the November 2016 presidential election. 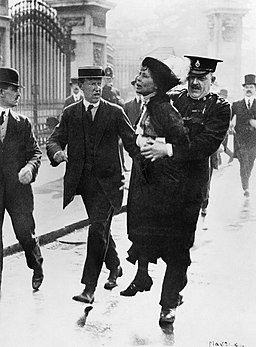 Emmeline Pankhurst, leader of the Woman’s Suffragette movement in England, arrested outside Buckingham Palace in London while trying to present a petition to King George V in May 1914. Photo from the British Imperial War Museum.


Signing a petition is an active measure taken by citizens numbering in the thousands or millions, as opposed to a select few hundreds or thousands responding passively to a pollster. Citizens mostly seek out petitions on their own initiative, or are made aware of them by friends or family, or by reading the news. The relative ease of signing a petition online, compared to signing one circulated door to door, does not discount that people are participating in the political process instead of waiting for someone to ask their opinion. The distinction is not a small one. Yes, physical participation in a protest weighs far more than signing an online petition in getting the attention of government leaders and the society at large, but an online petition nonetheless demonstrates that the people signing it are paying attention. Numbers have always given weight to petitions, and in the internet age it is possible for millions of people to make their wishes known to their representatives within days of a petition’s first appearance.

The petitions currently circulating urging United States House of Representatives legislators to impeach the occupant of the Oval Office are an excellent demonstration of the need of the people for an outlet to make their wishes known to their government. To anyone paying attention honestly to developments originating from the White House since January 2017, it has long been obvious that impeachment and conviction of the current president would be necessary sooner or later to uphold the rule of law. The nation’s legislators, however, always conscious of political calculations and of the interests of their big money donors, have been dragging their feet to avoid having to put themselves on the line in upholding the oath they took to preserve and defend the Constitution.

Captain Queeg, the character played by Humphrey Bogart in the 1954 film The Caine Mutiny, was obviously unstable, but nonetheless discharging him from his command was quite difficult because the captain of a vessel at sea is by necessity an autocrat whose authority is fully backed by a nation’s institutions. For all that, Captain Queeg was not a corrupt grifter with contempt for democratic institutions and a sneering disregard for the norms of civil discourse, and in comparison to the offenses of the current president, Queeg’s official transgressions were minor.

In other words, members of Congress have a constitutional duty to impeach this president for high crimes and misdemeanors he has engaged in too obviously for them to ignore any longer. Whether he will be convicted in the Republican-controlled Senate is anyone’s guess at this point. It probably depends on whether political calculations indicate to at least a few key Republican senators that the time has come at last to throw the president over the side, at which point many of the rest will scramble to get on board.

If millions of American people had waited politely for a pollster to ask them if impeachment was necessary, instead of taking matters into their own hands and petitioning their representatives, Congress might still be dithering, possibly all the way up to Election Day 2020. The current president may not get convicted in the Senate and removed from office before then, but it’s important that public hearings in Congress shine a light long enough and brightly enough on the corrupt and unethical practices of his administration that even the most disengaged voters will have to listen. A brick wall, no matter who constructed it, can keep people from hearing their government at work as well as keep government leaders from hearing the people, but now that representatives have finally listened to people engaged enough to petition them, it’s important that the rest of the populace listen honestly to the arguments for impeachment, and honest engagement requires more than checking an often lopsided Facebook news feed, a far sloppier way of exercising one’s civic duty than signing an online petition.
— Vita