A Confusion of Mums

How hardy are the chrysanthemums sold at nurseries, garden centers, and grocery stores in the fall? What is a Dendranthema mum? Are any of the mums used for a fall display going to survive if planted in the ground afterward? The answers are “somewhat”, “no one really knows”, and “maybe”. Welcome to the wonderful world of chrysanthemums, a flowering plant second in popularity only to the rose, and just as susceptible to hybridization and the fickleness that is often a byproduct of botanical experimentation.


If a gardener is concerned at all about procuring a truly hardy, perennial mum when out shopping, he or she might be better off disregarding most of the confusing nomenclature and instead following the rough rule of thumb that the more daisy-like the chrysanthemum flower, the hardier the plant. All those pom-pom and button flowered cultivars have been created by plant hybridizers who were motivated by producing what they presumed to be the showiest flowers, in profusion and in a wide range of colors. As in anything else in life, there are trade-offs, and in the case of hybridized chrysanthemums, generally known as florists’ mums, the trade-off for an abundance of puffed up flowers in nearly every color was a weakened plant that many buyers treat as a tender annual. 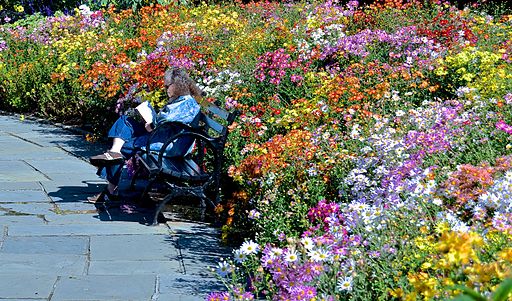 A mass of Korean chrysanthemums in bloom in October 2014 at the Conservatory Garden of New York City’s Central Park. Photo by Flickr user David McSpadden.


Here is a plant that has a short season of bloom, typically lasting only a month, which is not bad for a perennial, but is terrible for an annual. What makes most annuals a good value for gardeners is their tendency to bloom continuously for three or more months. Plant them in a particular spot in the garden and they will fill it with color for a season. Some annuals reseed themselves, making them yet a better value. Perennials typically flower a month or two in the year, but since gardeners don’t have to buy new ones each year, they are a good long term value. Many perennials also increase themselves by various means, such as underground runners in the case of truly hardy chrysanthemums.

The florists’ mums that take over stores in the fall are a marketer’s dream plant. Firstly, they demonstrate very well the axiom that “the flower sells the plant” because they have flowers to spare when the plants are at their relatively brief peak period of bloom. Secondly, their fickle requirements for success when planted out among the other perennials in a garden ensures they are only nominally perennials and are in practice annuals, and that translates to turnover for sellers, a yearly marketing bonanza as buyers get new plants each year. Lastly, the genetic pliability of chrysanthemums rewards the efforts of plant hybridizers to produce new and unusual cultivars year after year, driving novelty in the market and the higher profits accruing to patented plants. 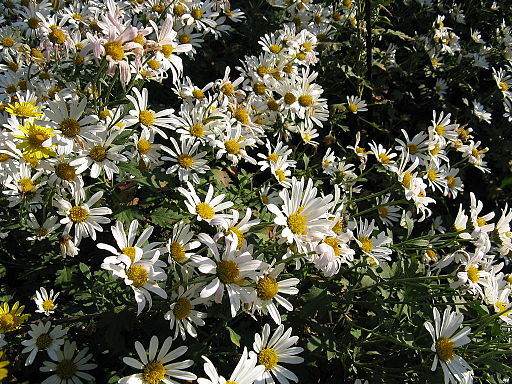 Chrysanthemum zawadskii in Osaka, Japan. Photo by KENPEI. These are also known as Korean chrysanthemums. The confusion of names makes plant selection difficult for people, but honey bees have no difficulty choosing to visit the flat, open flowers of these truly perennial chrysanthemums, which they prefer over the often tight quarters of the flowers on florists’ mums.

For gardeners who can’t resist picking up a few florists’ mums in the fall, the good news is that they can plant them out and get more than one brief season of bloom from them if they educate themselves about the plant’s requirements and take great care with them the first winter at least. Many gardeners may decide coddling florists’ mums is not worth the trouble, and for them the most pleasing mum in their gardens will be the truly perennial chrysanthemum, and it goes by many names, most often Dendranthema. There is a confusing history to that genus name, a name which for much of the late twentieth century actually applied to all chrysanthemums. Or most of them. It’s hard to tell. Probably it’s best not to bother about it too much. The truly perennial mums can be hard to find in plant nurseries and shops, and much easier to find in old cottage gardens. They’re the waist high mounds of plants covered in masses of daisy-like flowers that honey bees love visiting.
— Izzy