Where were you when the Allies stormed the beaches of Normandy on June 6, 1944? Were you only a glimmering in your parents’ brains?


Where were you when the Battle of Khe Sanh began on January 21, 1968? Were you nursing the bone spurs in your heels that would eventually earn you a medical deferment from the draft? Or were you awaiting a pilot’s commission in the Texas Air National Guard? 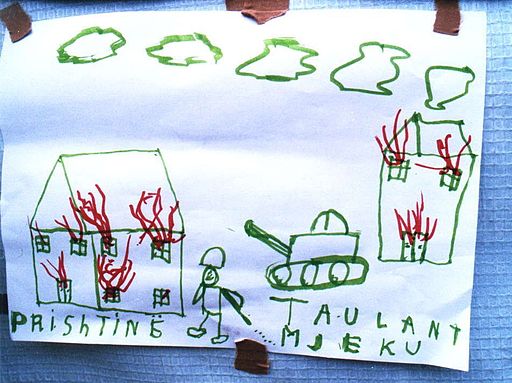 A drawing made by a refugee child, formerly resident in Pristina, Kosovo, depicting his horrific experiences in the Kosovo War in 1999. The drawing was taped to a wall in the Brazda refugee center in Macedonia. Photo from the U.S. Department of State and NATO.


Where were you when the United States and its allies launched the invasion of Iraq on March 20, 2003, beginning an unnecessary war that would spiral the entire region into chaos? Were you looking under furniture for weapons of mass destruction, something you would joke about later?

Where were you when the world learned in April 2004 that American soldiers had been torturing prisoners at Abu Ghraib prison? Were you throwing a few “bad apples” under the bus, rather than acknowledging a culture of cruelty encouraged from the top down in the chain of command? Or were you busy making the first year of your daytime television talk show a success? Or were you occupied with creating an illusion of yourself as a successful and hard-nosed, but fair, businessman on the first year of your television reality show that was more fiction than reality?

Dire Straits performs “The Man’s Too Strong” in concert at Wembley Arena in London, England in June 1985 during their Brothers in Arms tour.

Where were you in 2008 after conservatives had used the wedge issue of gay marriage four years earlier to whip up the ire of homophobic reactionaries and send them to the polls in just enough numbers to make it possible for the Republican candidate to steal another presidential election? Were you getting married? What does your friend, the Republican presidential candidate, have to say about that now? Is he against gay marriage only when it suits political expediency?

Where were you in August 2016 when the Turks made their first incursion into the Kurdish zone of Syria, where the Kurds had been America’s ally in the fight against the Islamic State in Syria (ISIS)? Were you listening to what the Russians had to say about your Democratic opponent in the presidential election, a practice you appear to have made into a habit since then as you extort other countries to get them to investigate your political rivals?

And where were all three of you when the brains were being passed out? It’s nice for people to have friends, but some friends are not worth having, such as a narcissistic sociopath or a war criminal, both of whom have proven time and again they look out only for themselves, and maybe their cronies as well. And in the sense of cronyism, a crony is not a true friend. And a friend may be a “sweet man” in private, but that shouldn’t shut out all the harm he’s caused in the world. Millions of Iraqis and Kurds may reflect on the old saying that “with friends like these, who needs enemies?”

David Gilmour, best known as the lead guitarist for Pink Floyd, performs the Pink Floyd song “Coming Back to Life” with a new band backing him in a concert at Pompeii, Italy in July 2016.