Of Thee I Sing

October 3, 2019 Isidore Gnome
Recently an Etsy entrepeneur started marketing “Make America Greta Again” caps, “Greta” being Greta Thunberg, the young Swedish climate activist who has been in the news lately after her speech at the United Nations in New York City and her participation in the Climate Strike, which she inspired with the Fridays for Future school strikes she started a year ago. The entrepeneur, Johan Hansson, claims 100 percent of the profits from cap sales will go to Greenpeace, and if that is indeed the case, then it appears his primary goal in making the caps is trolling the current president and his followers, the MAGA crowd.
Mr. Hansson did not think up the slogan for his caps, which has shown up on placards at climate change protests since Greta Thunberg became an internationally famous figure, but he did think to put the slogan on caps that look exactly like the original MAGA caps. The typography and colors are the same, and all Mr. Hansson had to do was switch around two letters. It’s a clever twist, and as for trolling the trolls it is bound to be effective. The question is whether that is the best way to read the science behind climate change, as Ms. Thunberg continually stresses is the driving force of her activism, or whether it is merely a satisfying way to get under the skin of MAGA people by giving them a dose of their own medicine. 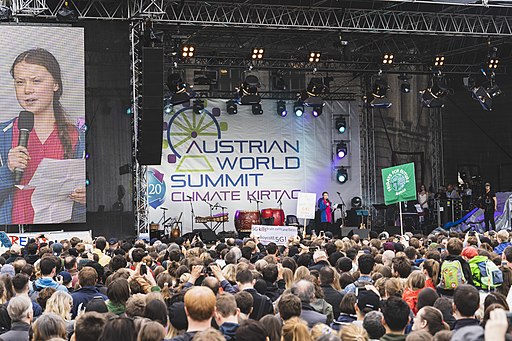 Greta Thunberg speaks at the May 2019 Austrian World Summit Climate Kirtag (or Fair). Photo originally posted to Flickr by the Austrian Foreign Ministry. Like the enlarged image of Ms. Thunberg on the screen at the left of the stage, her influence on the climate debate has grown in the past year such that journalists and politicians have attributed the tripling of seats gained in the Austrian parliament by the Green Party in the September 2019 election to what they call “The Greta Effect”.
The problem is not the altered slogan itself, but in how the design of the new cap mimics the original so closely that even from several feet away most people would be unable to distinguish the difference. The original MAGA cap has over the course of a few years become strongly associated with hatred and hatefulness, and the wearers delight in how its appearance “owns the libs”, or trolls them. For MAGA people, that’s part of the fun of wearing the cap. Since the new cap looks exactly the original from a distance, most reasonable people, associating the wearer with hateful beliefs and often unpleasant behavior, would probably steer clear, under the assumption the wearer is a devoted follower of the current president, a hateful person who often exhibits unpleasant behavior.
MAKE AMERICA
GRETA AGAIN
Fellow MAGA travelers, on the other hand, upon companionably sidling up to the wearer of a cap with a slightly changed slogan, may not even notice the difference until the wearer gives out unexpected opinions or points out the change to them. The old trick of switching two letters in a familiar word derives its surprise from how often people will gloss over the change in their minds and never even notice it.
MAKE AMERICA
GRETA AGAIN
Trolling trolls may seem satisfying at first, but the long term result is like that of a wrestling match between a person and a pig in a muddy pen (once considered a fun event at county fairs), in which the person ends up filthy and exhausted, and the pig is happily in his or her element. The altered slogan would probably serve its ultimate, positive message of taking action against climate change better by rising above the muck where the current president and his followers wallow in hatred and hatefulness. To do that with the slogan on caps, perhaps changing the color or font or point size of “Greta” would make all the difference in signaling to friend and foe alike that the original was only a point of departure, and a lowly one at that. Maybe change colors of the cap and the typography of “Greta” entirely so that it stands apart, the way Greta Thunberg herself has demonstrated in dealing with the trolls. Nothing infuriates trolls more than not being taken seriously and having their distractions ignored as reasonable people go on about the business of taking serious action on real problems, and that can give climate activists some measure of satisfaction in denying the power of climate change deniers in MAGA caps.
— Izzy