The Sound of Their Voices

September 8, 2019 Vita Historia
A documentary retrospective called Linda Ronstadt: The Sound of My Voice has been making the rounds of film festivals this summer, most recently at the Toronto International Film Festival, where it was a popular offering. Linda Ronstadt came to prominence in the 1970s covering songs in a style so distinctively her own that listeners could be forgiven for thinking the songs originated with her. Her first big hit, for example, was “Different Drum”, which she recorded in 1967 with the Stone Poneys. The song was first recorded by the Greenbriar Boys in 1966, and it was written in 1965 by Michael Nesmith of the Monkees.
An interesting twist to the story of “Different Drum” being written by Michael Nesmith is that most of the Monkees own hit songs were written by the Brill Building songwriting team of Tommy Boyce and Bobby Hart. One hit for the Monkees, “Pleasant Valley Sunday”, was written by another Brill Building songwriting team, Carole King and her husband at the time, Gerry Goffin. Those two wrote many hit songs for various artists during the 1960s, and after their divorce in 1969 Ms. King went on to a distinguished solo career singing her own songs. 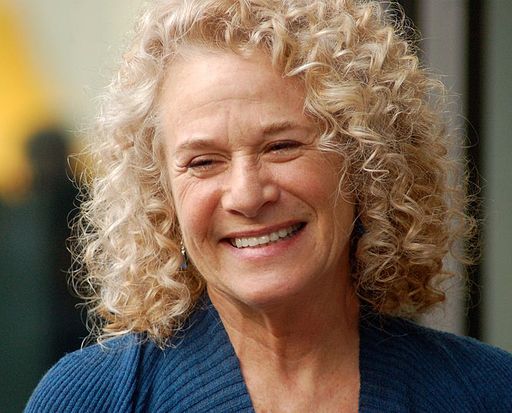 Carole King at the ceremony to receive her star on the Hollywood Walk of Fame in December 2012. Photo by Angela George.
Her 1971 album, Tapestry, became an enormous success, enjoyed by both men and women, but it made its greatest connection with women who came of age in the 1960s, and in the 1970s were staking claims to have their voices acknowledged and heard independently of men. The female singer-songwriters of the 1970s enjoyed popular and critical success in a music industry dominated by men, and despite the obstacles, such as male promoters encouraging them to push their sexual allure ahead of their singing and songwriting talents, they persevered and became strong, independent voices.

In this 1974 episode of the television show The Midnight Special, Melissa Manchester performed “Midnight Blue”, a song she co-wrote with Carole Bayer Sager, an alumna of the Brill Building. Ms. Manchester released an album including “Midnight Blue” the following year, and the song became her first hit. It takes skill and artistry to sustain intensity and interest in a slow song, as Ms. Manchester did beautifully in this rendition.

The list of women who made indelible marks in the popular music of the 1970s is long and would inevitably leave out some names. Not all of them wrote the majority of the songs they made famous, but in the song choices they made they exhibited an independent spirit. Linda Ronstadt, for instance, as she expanded her repertoire to include the Great American Songbook, chose songs that reflected character, strength, and respect. Melissa Manchester, who learned songwriting in a course taught in the early 1970s at New York University by another Brill Building alumnus, Paul Simon, had several hits with songs she co-wrote, and has also been a song stylist like Ms. Ronstadt and has followed a similar path since the 1970s and ’80s with distinctive renditions of standards.

Carole King’s Tapestry, with its well-known cover photo of her, barefooted and wild-haired, on a window seat with her cat, started out a decade of great music from female singer-songwriters with songs that eventually became standards themselves, covered dozens of times by other artists, male and female. Incidentally, that famous cover photo was taken by Jim McCrary at Ms. King’s home in Laurel Canyon, outside Los Angeles, and in the 1970s Laurel Canyon became the locus of much musical talent, and especially singer-songwriters.

In a 1993 concert at Bushnell Hall in Hartford, Connecticut, Carole King performed “You’ve Got a Friend”, one of the several hit songs from her 1971 album, Tapestry.

The decade closed with Linda Ronstadt, another inhabitant of Laurel Canyon in the ’70s, as the most successful female rock and pop singer of the time. Singing out throughout the time in between, and whether coming from the cramped quarters of the Brill Building in New York City or the openness of sunny southern California in Laurel Canyon, were Melissa Manchester and dozens of others every bit as talented, and all with new and interesting statements to make, creating music that expressed their unique times and has lasted beyond, affirmation of their skill and artistry in giving voice to their experience.