The Last Sane Man on Earth

September 5, 2019 Editor
“You hear the applause at the end of the routine, the people are actually applauding themselves. What I’m saying is not necessarily funny. It’s what you don’t hear that’s funny, and the audience supplies that. It presumes a certain intelligence on the part of your audience, and I think they appreciate that.”
— Bob Newhart speaking in an interview on National Public Radio’s Morning Edition in May 2014.
Happy 90th birthday to comedian and actor Bob Newhart, who was born in Oak Park, Illinois, a suburb outside Chicago, on September 5, 1929. Anyone who has ever enjoyed Mr. Newhart’s comedy knows he doesn’t talk down to his audience, and neither does he go way over their heads. His best friend, another comedian and actor, Don Rickles, placed Mr. Newhart’s appeal best when he nicknamed him “Charlie Everybody”. 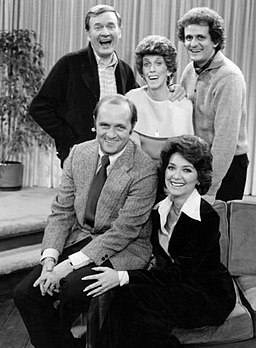 Bob Newhart has made a career of understatement and staying sane while quirky characters and peculiar events swirl around him, and his style allows his audience to come along with him rather than merely spectate. His straight man “Charlie Everybody” reactions heighten the comedy by letting absurdity seep in and speak for itself, and that requires a delicate sense of timing and a feeling for the oddity in everyday life, a talent he has that is neither as easy to come by nor as simple to share as he makes it seem. Hi, Bob, and happy birthday! Thanks for helping us laugh, and feel good, too, remembering the first is a passing reaction to an event or situation, while the second lingers with us long after the laughter fades.