August 25, 2019 Techly DoRight
Being good at trivia contests or general knowledge quizzes requires an excellent memory every bit as much as having learned widely. Without a memory capable of storing and retrieving vast amounts of information, a person cannot have learned well, though he or she may have studied widely. A strong capacity for memory is dependent partly on genetics and partly on the interest a person has in learning a thing. The lack of one factor or of both explains why some people can go through 16 or more years of schooling and not appear to have retained much knowledge beyond what would allow them to pass the next exam, while others can cite obscure facts from their reading years later, with or without having picked them up in a formal school setting.
The latter skill is often dismissed as nothing more than a parlor trick by jealous people who don’t possess the skill themselves. They are unwilling to give credit when credit is due by recognizing that some or all of the ability to recall bits of knowledge from a large store in memory may come from studious application of the individual to the hard task of learning, and that may be in addition to, or without benefit of, the gift of a genetically strong memory. These personal dynamics can be evident during a gathering of friends or family to play a game like Trivial Pursuit. 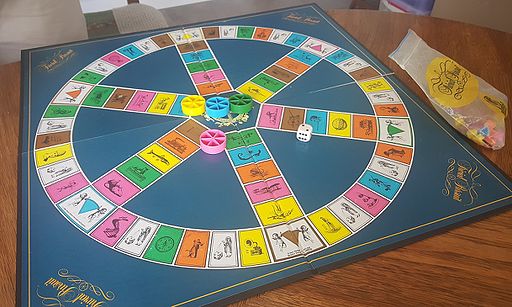 The board and pieces for Trivial Pursuit, the 1981 classic game. Photo by Pratyeka.
The flaw in a game like Trivial Pursuit, as popular as it has been since it made a splash in the board game market in 1981, is that in a contest between unevenly matched opponents, as is often the case in informal gatherings of friends and family, time and again there will be the same winners and the same losers. The winners may think there’s nothing wrong with that, but in a short time they will probably have trouble getting a game up, and then only with dispirited and half-interested opponents. And the losers go away either feeling stupid or defensively rationalizing that being able to dredge up trivia is merely a cheap parlor trick and doesn’t indicate true intelligence. That’s no fun!

There may be a kernel of truth to the opinions of all the players, and yet there should be a better way for everyone to shine and have fun. The habitual losers of a board game like Trivial Pursuit, or of home viewing play along sessions while watching the television quiz show Jeopardy!, are not necessarily stupid people, any more than the habitual winners are geniuses. A good game dynamic should welcome in a variety of personal strengths so that most players can be competitive. It appears former Jeopardy! champion Ken Jennings, along with game development partner Richard Garfield, the creator of Magic: The Gathering, have recognized the flaw at the heart of many trivia games and tried to overcome it in their new game called Half-Truth.

Half-Truth calls on a player’s capacity for deductive reasoning and strategic thinking as well as the usual ability in trivia games of being able to tap into a personal well of knowledge. Expected release for the game is this year’s holiday season. Like all but a few trivia board games and pub trivia nights, using smartphones to look up answers will probably be against the rules. Leveling the playing field by incorporating more ways for more players to remain competitive rather than relying on the one and only way available in standard trivia games seems like a good plan for a game that will become popular and get played more than a few times and not soon forgotten on a closet shelf like many other trivia board games, and that will lead to sales of additional sets of question cards, the great recurring source of revenue for trivia game makers. In the old days, a player could cheat by memorizing the information on cards played over and over again; now they cheat by sneaking a peek at their smartphone, the handheld virtual encyclopedia.
— Techly